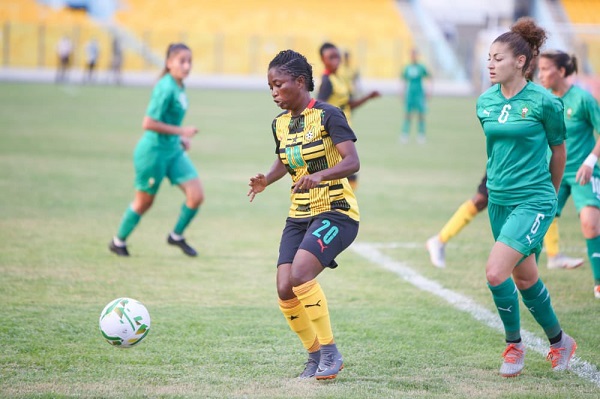 Ghana's senior female football team, Black Queens came back from a goal down to beat their Moroccan counterparts 3-1 in an international friendly staged at the Accra stadium on Thursday.

The visiting team drew first blood three minutes after kick-off through a spot-kick after defender Linda Eshun brought down Moroccan attacker Anani Salma in the penalty box. Skipper Chennai Ghizzlane scored from the spot for the opening goal.

The Queens did not take long to recompose themselves and take charge of the exchanges as they laid siege in their opponents' goal area in search of the equalise relentless attack paid off in the 26th minute when attacker Faustina Kyeremeh was released by Sandra Owusu-Ansah at the edge of the box as she unleashed a left-foot drive past the Moroccan goalkeeper to pull level.

The Ghanaians continued to sustain the pressure on their opponents in search of more goal but met resistance from defenders Hady Sounia and Boukhami Siham who coach Mercy Tagoe-Quarcoo's forwards at bay.

However the Moroccans' woes were worsened when forward Quinekh Nawael was shown the red card for dissent after an altercation with the referee who had earlier awarded a free-kick in favour of the Queens. The resultant kick saw Eshun curling the ball above the human defensive wall into the back of the net, making amends for her earlier error to give the Ghanaians a 2-1 lead almost at halftime.

Back from recess, the Moroccans launched an onslaught but it was repelled by the Queens defence.

Under pressure from their numerical deficit, the Moroccans appeared energised as they took the fight to the hosts in search of the equaliser. However, committing players in attack left them vulnerable at the rear end as 52nd minute counter-attack by the Queens saw Grace Animah releasing teammate Faustina Kyeremeh at the edge of the opponents' penalty box as the Ghanaian forward coolly slotted the ball past an advancing Zouhair Assia for Ghana's third goal.

Earlier in the day, Ghana’s under-20 female team, Black Princesses lost 0-1 to their Moroccan counterparts in another friendly encounter.

The two sides clash again at the Accra stadium on Monday.