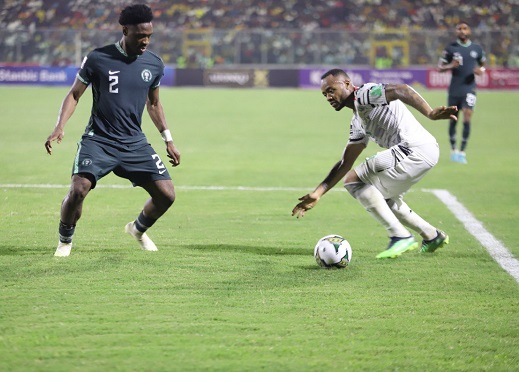 Ghana’s chances of picking one of Africa's five tickets to October's Qatar FIFA World Cup hangs in a balance after drawing goalless with rivals, Super Eagles of Nigeria, in the first leg of the 2022 FIFA World Cup qualifying playoffs at the Baba Yara Stadium in Kumasi last night.

Despite their inability to score though, some Ghanaian fans are still optimistic they could still make it to the Mundial following an improved performance compared to the Cameroun AFCON debacle.

Amazing Stars
The Stars were amazing from kickoff with Mohammed Kudus as the main attraction twisting and turning his markers with Captain Thomas Party as the raft linking the defence and attack.

Indeed, Coach Otto Addo's side looked a more purposeful team compared with the side that put up a poor performance at the recent Africa Cup of Nations in Cameroun.

The vociferous crowd, some of whom benefitted from a stampede at the gates to gain access, played the '12th man' for Ghana with continuous cheering with created an electrifying atmosphere for the team as Abdul Fatawu Issahaku, Kudus and Felix Afenya-Gyan pushed for the opening goal.

Thousands of fans had queued all day long to gain access to the stadium but the verification process from the newly introduced E-ticket was slow. And as the kickoff time approached, they massed up at the gate, overpowered the heavy security presence and broke the boundaries to fill the 42,000-seater capacity stadium.

The Super Eagles started with a cautious approach but nearly fetched the opener through Victor James Osimhen who failed in his bid to connect a long drive from the left.

After 24 minutes, it became clear that the star-studded Nigerians were in town just to frustrate the home side to finish with a respectable scoreline and hope to turn the tables with home advantage in Abuja next Tuesday.

And they appeared to be succeeding as Jordan Ayew, who was shifted to the left side of attack and Baba Iddrisu were heavily checked by their markers.

The Stars dominated play and fought for every ball in a manner hardly witnessed of the team in a long while, yet they were unable to translate their dominance into goals after 30 minutes of play.

Ajax Amsterdam prodigy Kudus brought the home fans to their feet in the 32nd minute with a pile driver from 30 yards which forced Nigeria goalkeeper, Francis Uzoho to punch the ball to corner.

By the 40th minute, the Nigerians began to come out of their shells and nearly fetched the opener but Joseph Ayodele-Aribo lifted a close range ball over the crossbar.

There was very little to choose between the two as Nigeria, ranked third on the continent and 32nd in the world, did not show much difference between them and Ghana currently ranked 11th in Africa and 61st in the world.

Ghanaians expected a lot from Skipper Partey to dominate the midfield in the second half but he could not replicate his fine form at English side Arsenal and did not provide the needed push for the attackers to trouble the Nigerian defenders much.

Early in the second half, the Ghanaians went to sleep monetarily and allowed the Nigerians to build up in attack as Moses nearly scored. His thunderbolt from close range brought out the best in goalkeeper Joseph Wollacott whose dramatic save brought relief to the team and expectant fans.

The Nigerian forward picked up a loose ball in 53rd minute, drove forward and fired only to be saved by the foot of goalkeeper Wollacott.

The Nigerians played an improved game in the second half, as the inexperience of the young Ghanaian forward Afena-Gyan showed up occasionally as he lacked the composure to find the back of the net in scoring range when put under pressure his markers.

The AS Roma forward suffered an injury and replaced by St Pauli's Daniel Kofi Kyereh as Ayew reverted to arrowhead position with some positive runs.

The fans got excited as Kudus turned on the style with some immaculate runs and footwork cutting into the Nigerian defence with ease. In one of the moves, his power drive in the 70th minute was thwarted by goalkeeper Uzoho to the disappointment of the expectant fans.
Bad pass
Late into the match, a few hearts missed a beat after Moroccan referee Redouqne Jiyed awarded a spot kick to Nigeria after defender Baba Iddrisu was tripped and handled the ball in an attempt to clear a short pass by Joseph Wollacott in the 75th minute.

However, after a review by the Video Assistant Referee (VAR), the referee over-ruled the decision and awarded a free kick in favour of Ghana amid brief protests by the Nigerians.

Coach Addo later brought replaced Ayew with Kwesi Okyere Wreidt and brought on Osman Bukari for Issahaku in a bid to inject more energy into to the team but they had little time to settle into their game to make any meaningful impact.

The team will now look to the return encounter at the Moshood Abiola International Stadium in Abuja on Tuesday for a win and a ticket to the World Cup in Qatar.