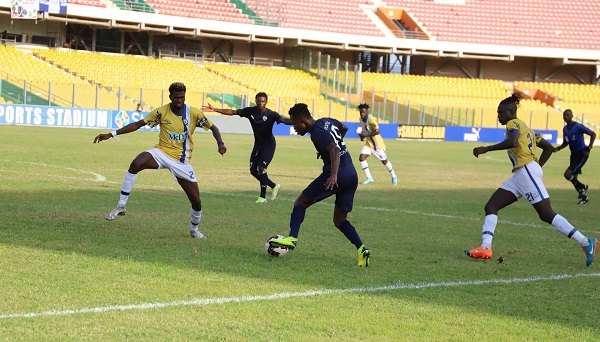 Visiting Accra Great Olympics survived a barrage of attacks from Accra Lions to settle for a goalless draw in the 19th week fixture of the Ghana Premier League staged at the Accra Stadium yesterday.

Lions will rue clear-cut opportunities that came their way but the players lacked the cutting edge in front of Olympics' goal area to punish the Wonder Club who will count themselves lucky for escaping with a draw.

Lions went on the prowl from the start of the match by making incursions in the Olympics area in search of the opening goal but often lost the plot in their opponents' goal area.

Olympics woke up from their slumber in the 30th minute when the Quaye brothers, Maxwell and Samuel, combined effectively in the area but when they put attacker, Raymond Oko Grippman, through he fluffed the opportunity to score.

After recess, Lions took charge of affairs and laid siege in the Olympics area but golden chances set up by the midfielders, Abass Sumaila and Bassit Seidu, for Daniel Kwame Awuni to score for Lions were wasted by the winger.

In the 57th minute, Kwame Awuni missed another chance to shoot his side ahead when he was released by Seidu at close range but with Olympics goalkeeper, Stephen Kwaku, at his mercy, he blasted the ball away.

Sensing danger, Olympics coach, Daniel Annor Walker, brought on attackers James Akaminko and Ibrahim Sulley to bolster the attack, after which Olympics assumed some possession and control of the game but could not translate that advantage into a goal.

Lions also brought on Frederick Akatuk to provide some cutting edge in attack but the forward made little impact on their play.