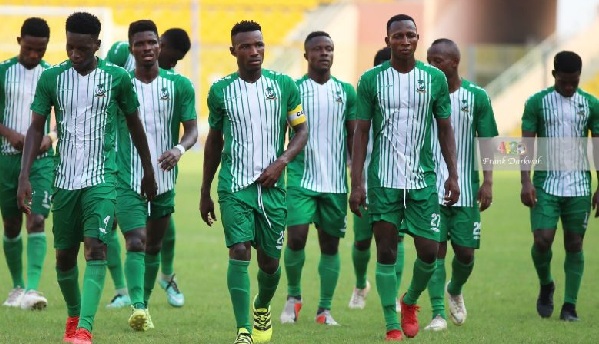 At the end of the tension-packed match, Faisal won 3-2 as Kotoko's famed second half rally failed to work.

The two beautiful goals by Faisal appeared to have come from a well rehearsed tactics initiated from the centre circle through the right flank and then into the penalty box.

Both goals were from a three-man move initiated from the centre circle by Enock Morrison, powdered on the right flank by Mawuli Wayo for Zubairu Ibrahim to finish it off beautifully.

The first goal went off the body of goalkeeper Razak Abalora before settling in the net in the fourth minute. In the 17th minute, the same player fired home a carpet shot to increase the tally to silence the numerous Kotoko fans.

Kotoko's Cameroonian international, George Omgba, also made his presence felt as he scored twice in the 47th minute and 73rd minutes but Ibrahim’s goal in the 68th minute from a fast break down the right won the match for Faisal in their Kumasi derby.

King Faisal's resilience was amazing and their confidence level was exciting, most of the time deciding the tempo of the game .
However, Kotoko maintained their focus even after the goals; probing for the equaliser which made the match exciting.

The well-composed Faisal defence never panicked, stroking the ball with ease at the rear with some occasional dominance in the middle.

With defeat staring him in the face, Kotoko's head coach, Dr Prosper Narteh Ogum, appeared lost in finding an antidote to the intermittent long balls  by Faisal.

The otherwise beautiful game was nearly marred by Referee Julian Nunoo Akwa who mistook "a leg ball" for a handball in the penalty area of Faisal.

The decision to award a penalty against King Faisal was vehemently protested by both players and the fans, compelling the referee to reverse his action in the 40th minute after three minutes of arguments. But Kotoko never gave up, employing all their strength in the second half.

Two minutes into the second half, goalkeeper Frank Boateng, who hitherto was doing well, gifted Kotoko their first goal after dropping an aerial ball in front of  the Cameroonian international, George Omgba, to score.

Referee Akwa appeared not to have recovered from his strange penalty decision as he made strange decisions in the second half, causing the fans to react with boos.

He denied Faisal a 55th minute penalty appeal and was indecisive from then on. Two minutes later, Ibrahim scored his third for the day, before the Cameroonian scored his personal second in the  73rd minute.