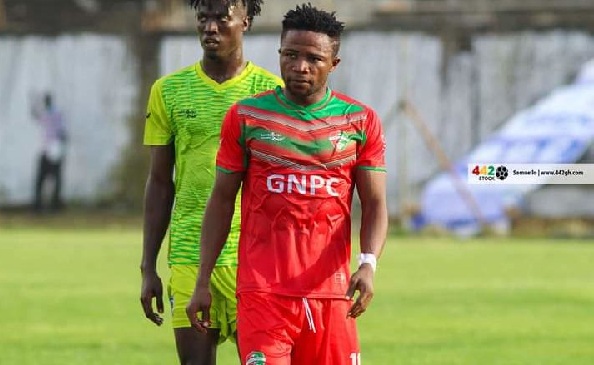 Diawisie Taylor was on target for Karela United
30.5k Shares

Karela United went to the summit of the Premier League following a comfortable 4-1 win over Berekum Chelsea at the Crossby Awuah Memorial Park at Anyinase yesterday.

A brace each by midfielder Diawisie Taylor and Kwame Boateng gave the hosts a convincing win with John Andoh scoring a consolation for Chelsea in the five-goal thriller.

Karela leapfrogged second-placed Bechem United to open a one-point lead ahead of their fixture in Accra on Saturday against improved Great Olympics who are in fifth position on the log after their 2-0 win over inter Allies last Friday.

At Sogakope yesterday, Kumasi Asante Kotoko failed to end WAFA’s unbeaten run at home when they came back from a goal down to earn a vital point at the RedBull Arena. T
Kwame Opoku netted his third goal in two matches after 63 minutes to cancel Daniel Lomotey’s 29th minute strike. It was a valuable point gained by the visiting side side slipped to the seventh position and one point shy of sixth-placed WAFA but with a game in hand.

At Obuasi, Ashantigold were held to a goalless stalemate by Medeama at the Len Clay Stadium which saw the Soccer Miners slipping from the top spot to the third position behind Karela and Bechem United who were held by Dreams FC to a 1-1 draw at the Nana Fosu Gyeambour Park, Bechem.

Moro Salifu opened the scoring for Bechem in the 11th minute but an Ibrahim Issah penalty after 74 minutes denied the host a precious victory over their opponents.

Legon Cities failed to build on their win over WAFA last week as they lost 1-2 to Aduana Stars at the Nana Agyemang Badu Park, Dromaa-Ahenkro.

Goals from marksman Yahaya Mohammed in the 21st minute gave the hosts the lead but that was cancelled by Francis Addo immediately after recess.

However, Aduana restored their lead on the 49th minute through Fatawu Abdulrahman which proved to be the match winner for his side.

The Royals’ fifth loss of the season pushed them to the bottom spot on the log while moved to the eighth position.

King Faisal held on to their unbeaten run in five games when they drew 1-1 with Elmina Sharks. A Razak Toufiq strike on the 59th minute helped Faisal to avoid a defeat at home after James Bissue netted a spot kick for the visitors.