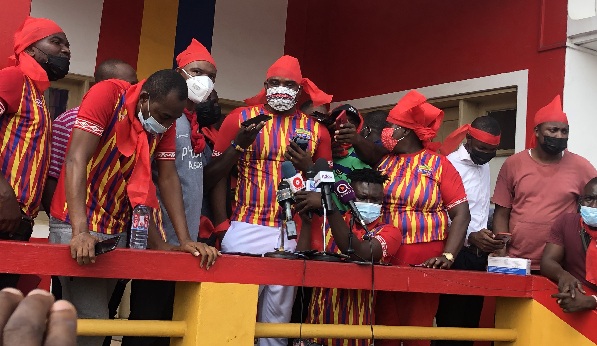 The National Chapters Committee (NCC) of Accra Hearts of Oak has threatened to block any attempt by management to impose another expatriate coach on the club following the exit of Serbian, Kosta Papic.

Papic exited the club last Monday citing interference on the part of management but the supporters’ wing of the club led by chairman, Elvis Herman Hesse, at a press conference on Wednesday warned management never to introduce another foreign coach else they would sack him from the training ground.

Instead, they have proposed to give their full backing to any local coach who would be appointed to take over since the foreign once barely add anything to the club.

Addressing the media at the club’s secretariat on Wednesday, Mr Hesse explained that the club was yet to achieve success despite appointing several expatriates as coaches.

“We are demanding that the club will appoint a local coach when it decides to appoint a successor to Kosta Papic.

“Over the years, we have seen management members appointing expatriates and it didn’t work so we don’t want any more of them,” Mr Hesse said.


On the other hand, the club's supporters group called on the board of directors of the club to appoint a Chief Executive Officer to steer the day to day affairs of Hearts immediately.

Mr Hesse also demanded an immediate Annual General Meeting (AGM) with all stakeholders of the club to decide on next direction of the club having gone three years without one.

“We demand an appointment of a new Chief Executive Officer who will steer the affairs of the club because we believe it is very important in our quest to restore the club’s fortunes.

“How can a club of Hearts’ calibre go three years without an AGM? We want the leadership to call for one immediately.”

Hearts are currently placed 11th on the Ghana Premier League (GPL) log after going four games without a win.

Hearts will welcome Ebusua Dwarfs to the Accra Stadium on Sunday with the focus of returning to winning ways.

members anything that belongs to a set or class More (Definitions, Synonyms, Translation)