Hearts of Oak give up on Gladson Awako, not registered for Premier League 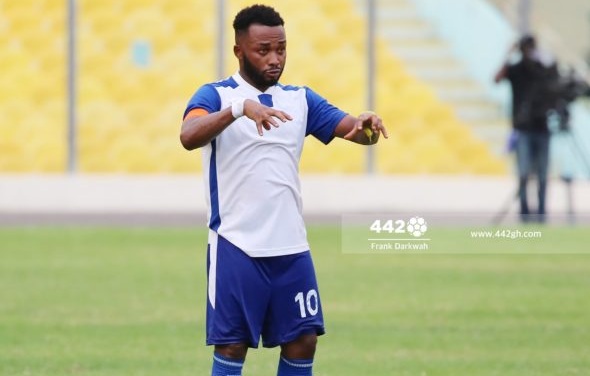 Gladson Awako, one of the star players of the Ghana Premier League last season, is all dressed up but nowhere to play for now as the 2021/22 season got underway last Friday.

And for fans eager to see Awako in the jersey of Hearts of Oak this season, they may be disappointed as the club appear to have abandoned their interest in the player following a furore over his transfer from city rivals Great Olympics.

Upset over the twists and turns of the transfer, after the player went into self-imposed exile over some personal issues, as well as insistence by Olympics that the contract had been nullified due to a failure by Hearts to pay the second instalment of the transfer fee by an agreed date. The Phobians appear to have washed their hands off the midfielder and want to concentrate on the domestic and continental competitions.

According to a board member of Hearts, Dr Nyaho Nyaho-Tamakloe, the club have abandoned their pursuit of the 31-year-old player and have decided to move on.

Dr Nyaho-Tamakloe told the Graphic Sports yesterday that Hearts decided against registering Awako for the upcoming season and to allow him to go, with Olympics reminding the GFA to allow them to register the player under special circumstances because the first transfer window had closed.

Unhappy about the conduct of the player, the Hearts director disclosed that Awako was not part of the squad registered for this season’s Premier League and so the club could let him go.

“As for Awako his coming back [to Hearts] is a doubtful case; he wasn’t even registered for the league. As far as I am concerned, he is not coming back,” Dr Nyaho-Tamakloe said.

Awako had been one of Hearts' top targets following his fine display for Olympics last season, including scoring a sublime goal against the Phobians in the first round clash at the Accra Sports Stadium. He subsequently made a switch to the league champions for a deal reportedly worth GH¢100,000.

Ironically, weeks after signing for Hearts, Awako abandoned the club, citing personals reasons for staying away from training.

In another twist last month, the CEO of Olympics, OIoboi Commodore, stirred up controversy by demanding the release of the player on claims that Hearts defaulted in the payment of the second tranche of the transfer fee, amounting to GH¢50,000 after the October 2 deadline, leading to exchange of words between him and Hearts board member, Vincent Sowah Odotei, who signed the contract document on behalf of Hearts.

Mr Commodore told the Graphic Sports last week that Olympics had petitioned the Player status Committee of the Ghana Football Association to grant the club a special dispensation to register the player due to the exceptional circumstances over his botched transfer to Hearts.

The case is yet to be adjudicated and ruled on by the Play Status Committee.