Hearts of Oak crash out of CAF Champions League 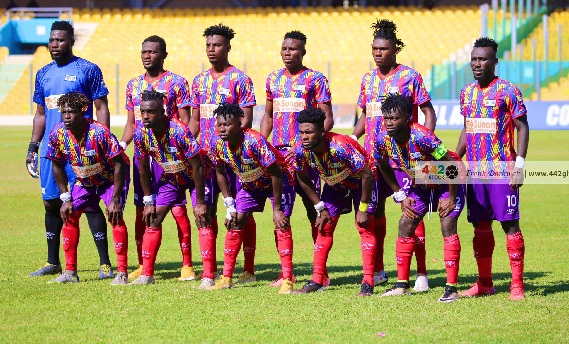 A line up of the Hearts of Oak team

Accra Hearts of Oak were eliminated from the CAF Champions League competition after suffering an embarrassing 1-6 loss to Wydad Athletic Club (WAC) in the return leg first round clash in Casablanca, Morocco.

The Moroccans, who lost the first leg 0-1 in Accra, advance to the group stage of Africa's premier inter-club competition on a 7-2 aggregate.

The Phobians went into the match with a slim advantage and as underdogs but paid dearly for poor defending and some dodgy refereeing decisions. By the fourth minute the home side cancelled the deficit through Simon Msuva and three minutes later they had their noses in front as Aymane El Hassouni shot into Wydad into the lead through a well-taken free-kick.

Just when the Ghanaian side were warming themselves into the game, WAC centre-back Achraf Dari made it 3-0 in the 20th minute. A controversial penalty awarded the home side just deflated the Phobians as Yahya Jabrane displaced Hearts goalkeeper Richard Attah to give WAC an unassailable 4-0 lead into half time.

Hearts could not change the pattern of the game after recess as defender Ayoub El Amloud compounded the woes of Coach Samuel Boadu's side with the fifth goal two minutes into the second half while Tanzanian forward Msuva made it 6-0 and a personal second goal in the 61st minute.