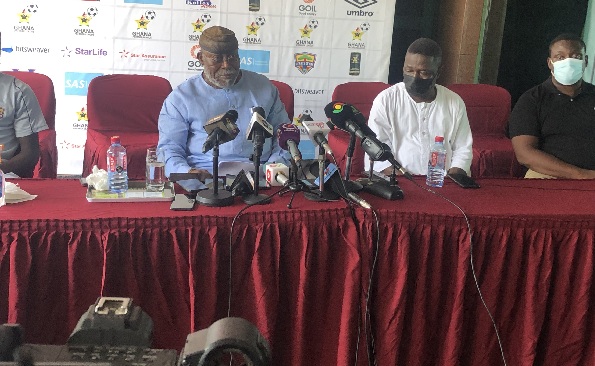 Accra Hearts of Oak have taken a swipe at the club's former coach Kostadin Papic for allegedly masterminding a crisis that had led to a sharp division among the playing body of the club.

Addressing the press in Accra yesterday, a director of Hearts, Dr Nyaho Nyaho-Tamakloe, said contrary to the Serbian coach’s claims that he was sacked, the Serbian gaffer willingly quit the job after only two months in charge despite persuasions from the club's board chairman, Togbe Afede XIV, to rescind his decision.

On Monday, the Phobians issued a statement confirming the resignation of Papic and the club's Goalkeepers' Trainer, Ben Owu. Subsequently, the club's Team Manager, Sabahn Quaye, has also left the job and triggered unrest by the club's supporters over what they perceive to be imminent crisis in the nation's oldest existing club.

Yesterday, Dr Nyaho-Tamakloe refuted claims that the coach faced interference, describing such claim as a figment of the coach’s imagination and dared him to come out and prove "where and how his job was interfered with"

Narrating the incident leading to Papic’s exit, Dr Nyaho-Tamakloe said prior to his resignation, the board met the Serbian gaffer to iron out the issues. But the coach reportedly told his employers that his decision to resign was informed by a “lack of trust from the players, players refusal to abide by his instruction, division in the playing body, general lack of cooperation from the players and his inability to turn the situation around."

The Hearts director added that upon interrogation with the playing body, it became apparent that there were deep divisions among the playing body as a result of how the coach was managing the team. The players, he claimed, made allegations about favouritism in player selection, the coach’s inability to keep to one winning team, and his incoherent instructions as the key reasons behind the club's recent slump in the league after an impressive start under Papic.

In the meantime, the club has urged the supporters to remain calm as they work hard to find a replacement for the Serbian and invited all stakeholders to attend the Annual General Meeting (AGM) scheduled for June where issues such as the restructuring of the board would be considered.

“The board wishes to inform supporters that it intends to make a Rights issue of shares immediately after the AGM to enable those holding shares buy more shares, and also allow new investors to buy”, he said.