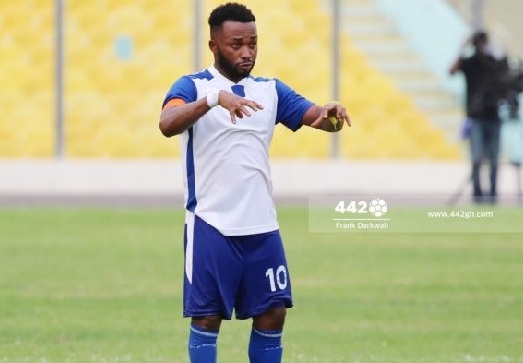 Accra Great Olympics have made an audacious demand to Hearts of Oak for the immediate release of Gladson Awako, to enable them to register the midfielder for the upcoming Premier League season.

It is the latest and strange twist in the transfer of the 31-year-old player to Hearts at the end of last season, with the wonder club seeking to set aside the deal for alleged breach of contract by the Phobians.

Since his GH¢100,000 transfer, Awako is yet to settle down at his new club and play in any competitive match due to personal problems which has kept him away from the club for some weeks now. Nonetheless, Olympics are now demanding his return on grounds that Hearts failed to settle an amount of GH₵50,000, representing the second tranche of the transfer fee, which Olympics claim breaches the transfer agreement and automatically nullifies the deal.

Last Friday, the CEO of Olympics, Oloboi Commodore, told the Graphic Sports in an interview that he had written to Hearts to release Awako back to the Wonder Club for registration. Ironically, Awako's original contract with Olympics was due to expire with Olympics on October 2 before his transfer to Hearts two months ago. “We have written to them and we’re expecting that they will release the player to come to Olympics. Registration will be closing on October 23 and I’ve been asked to submit the names of our squad by Monday [October 25], so they are wasting our time,” Mr Commodore said.

The Olympics CEO is drawing his strength from a clause in the contract, which states that the failure of hearts to pay the second tranche of the agreed fees by October 2, 2021 automatically nullifies the agreement.

A fifth clause of the transfer agreement, a copy of which Olympics furnished the Graphic Sports, states that, “the final payment of fifty thousand Ghana Cedis (GH₵50,000.00) shall be paid on 2nd October, 2021 without which this agreement automatically terminates and the player reverts to Party A without the refund of any amount received either by Party A or the player”.

In their letter to Hearts and copied to the Ghana football Association and Awako requesting the return of the player, Olympics stated: "Please be informed that by reason of your refusal and failure to respect the agreement, paragraph (5) of the said agreement is automatically invoked.

"You are respectfully advised to release the player, Gladson Awako, to Accra Great Olympics immediately so that we can process his registration for the 2021/22 football season."

Mr Commodore explained to the Graphic Sports that because the player spent some days with Hearts, those outstanding days on his contract with Olympics would be calculated to reflect the new expiry date on his original contract with the club.

He said Olympics trusted Hearts and that was why they accepted the down payment of 50 per cent instead of the full amount, before releasing the player. He said Hearts never gave them any explanation even when they reneged on the payment of the balance after the October 2 deadline.

“When we asked them (Hearts) to pay by cash or banker’s order, they begged that they will pay by a personal cheque of their chairman and we knew that their chairman was a trustworthy person so we accepted that. Otherwise, we were waiting for the total amount to be paid before releasing the player.”