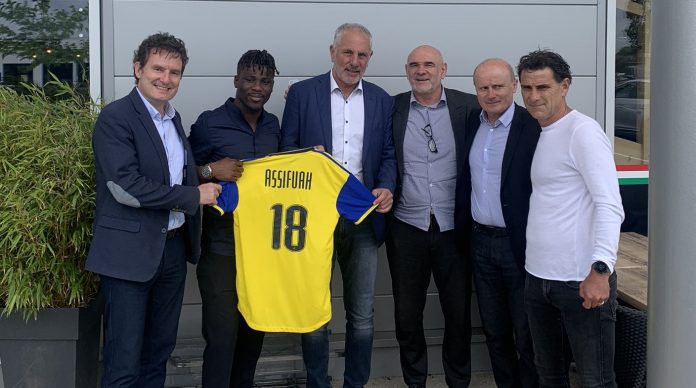 Ebenezer Assifuah is presented with his new club jersey after signing for Pau FC
30.5k Shares

Assifuah left Le Havre last week following the expiration of his contract and he has been snapped up by Pau FC as they seek to add more bite to their attack for Ligue 2 football next season.

The deal was completed on Thursday night and the Ghanaian has been tasked to use his huge experience in the division to help Pau FC to maintain their second-tier status.

The former Ghana under-20 striker was signed by FC Pau upon the request of new coach Didier Tholot whom he previously worked with at FC Sion in Switzerland.

Tagged as a huge prospect a few years ago, Assifuah, 26, has failed to hit his peak in his European career with his stint with FC Sion being his only memorable exploit.

The nimble-footed attacker was part of the Ghana national under-20 team at the 2013 World Youth Cup in Turkey where he emerged as the top scorer with six goals.

Assifuah has also been capped once by Ghana at senior level in a 2017 AFCON qualifier against Mozambique on March 27, 2016.

He was part of Ghana's squad at the 2017 Africa Cup of Nations in Gabon.