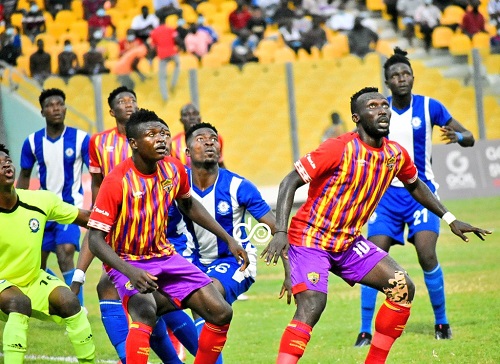 Olympics and Hearts played after easing of restriction
30.5k Shares

That decision weighed heavily on all the sporting federations and, particularly, football, which was trying to bounced back from almost a year of non-activities as a result of a truncation due to the corruption expose’ by investigative journalist, Anas Aremeyaw Anas, in June 2018.

At that time, the Ghana Premier League was almost half-way through the season’s matches and the games were beginning to generate some excitement among fans.

Impact on football
That decision completely led to another cycle of cancellation of the league entirely despite other European countries playing behind closed doors, just to prevent the spread of the deadly virus.

Not only the premier league, but the Division One League (DOL), right down to colts football as well as women football were all put on ice over that period. The Africa Cup of Nations (AFCON) qualifiers for the Black Stars were also affected as their qualifier against Sao Tome and Principe and South Africa had to be rescheduled.

The resultant impact was the massive job losses for over 500,000 individuals who earned a living directly through football, as well as technical team staff, according to Ghana Football Association president, (GFA) Kurt Okraku.

Other auxiliary staff and service providers, under the chain of football, were all denied an opportunity to earn an income likewise revenue needed by the state for development until the restriction was eased last November.

During that time, some club owners desperately had to reconsider the terms in the contract with their players and, for instance, according to Bechem United bankroller, Kingsley Owusu Achau, some of his players had to resort to farming just to enable them to keep their heads above water.

The precarious financial situation by some players and officials needed urgent intervention by the state and the response was the payment of a stipend of GH₵500 monthly to the women footballers as well as athletes from the lesser-known sports by the government.

Since the directives for the resumption football activities in the country last year, the game has started generating some excitement again although the matches are supposed to be played under strict COVID-19 protocols with just about 20 per cent fans capacity allowed.

In spite of that, some clubs have incurred the wrath of the local football governing body after they failed to strictly implement the COVID-19 protocol during their games. Aduana Stars outstanding game against Hearts of Oak two months ago, for instance, saw more fans allowed into the stands than expected.

Hearts of Oak were also convicted to playing behind closed doors for the rest of their matches after admitting more fans into the stands during their game against Accra Great Olympics.

Boxing return soon
Another sport that had to bear the full brunt of the President’s decision was boxing which had witnessed an upsurge in enthusiasm with the construction of the Bukom Boxing Arena.

Until the outbreak, the Arena had been buzzing with boxing activities and Bukom was the place to be for boxing fans on a Friday night but the hub, considered as the Las Vegas of Ghana boxing, became a ghost town following the suspension.

No activities took place over there and the pugilistic sport which was mostly loved and had produced some of the greatest athletes in the sports such as D.K Poison, Azumah Nelson, Ike Quartey, Joshua Clottey and Joseph Agbeko suffered similar fate as football in terms of providing income for the boxers.

Easing of the restrictions, however, was received with glee by the fraternity and it didn’t take long for the first major bout to be organised in December.

Elisha Owusu, a US-based Ghanaian boxer, and Ben Annorah headlined the first bout to herald what was going to be a busy year for the game in order to cover up for the times lost during the suspension. Subsequently, several other bouts have been staged just to get the sport back to action.

Sadly though, activities on these courses had to be suspended keeping away the services of caddies and other workers in the sports but this is about to change as the competition has started returning gradually to the various courses.

Others such as tennis, swimming, and other lesser-known sports which wasn’t affected too much by the restriction had to respect the decision and limit their competitive participations but they seem to be bouncing back with activities and tournaments.