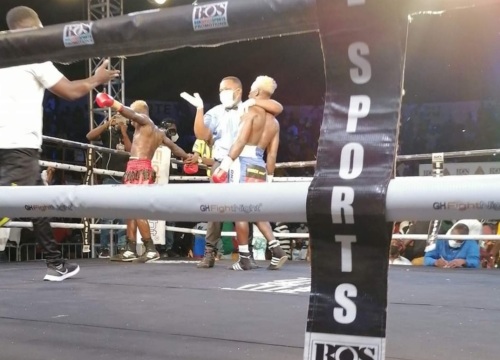 The camp of former national lightweight champion, Sheriff ‘One Time’ Quaye, has criticised referee Erasmus Owoo for not giving their fighter the chance to continue his grudge fight with Michael ‘One Bullet’ Ansah during their Independence Day Trilogy bout at the Bukom Boxing Arena last Saturday night.

Quaye, who had won the first four rounds of the bout, failed to block a left hook by Ansah which sent him to the canvas and subsequently led to the stoppage in round five.

Referee Owoo in explaining his decision to end the bout said Quaye did not look good to continue after the knockdown.

“I expected him to walk steadily to me with his hands up but that wasn’t the case and that convinced me to stop the fight,” Referee Owoo told the Graphic Sports.

“I did my job as the referee to avoid any danger in the ring. He didn’t look good to continue and that was why I stopped the fight.”

However, Quaye’s camp felt otherwise. Trainer Lawrence Carl Lokko said he expected referee Owoo to give his boxer a chance to continue which he did not.

“It was too early to end the fight because he was up after the knockdown,” Coach Lokko said. “I was really disappointed in the call but I have to respect it.”

Ansah has proved to be the better of his nemesis, Quaye, in their three fights. After losing a controversial split decision in their maiden bout in October 2018, he has come back twice to earn two stoppage victories over his opponent, in March 2019 and 2021.