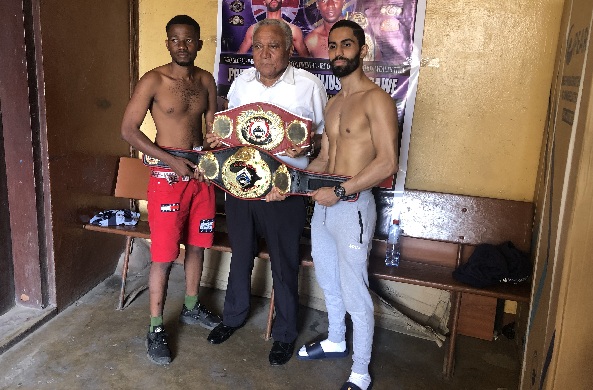 British boxer Prince Patel has declared his intention to beat Julius Kisarawe of Tanzania when they clash on March 27 in Accra to land a shot at the WBO Africa title held by former two-time world bantamweight champion Joseph Agbeko.

Patel, who arrived in Ghana last Monday ahead of his headliner with Kisarawe in Accra, described the fight as a must-win opportunity, which he believes would offer him the opportunity to get far in the sport.

The two boxers are in Ghana ahead of their super flyweight championship for the WBO Global, WBO Africa, WBA Intercontinental and IBF Continental Commonwealth titles at the Cahaya Lounge at East Legon in Accra.

Patel will have another opportunity to win the titles away from home after his fight with Tanzania’s Innocent Evarist ended in a split draw.

In an interview with the Daily Graphic, Patel said he was ready to offer his best on March 27 and called on boxing enthusiasts to come and witness a great show.

“I am really prepared for these belts and I can’t wait to win them. It is going to be a win for me so I can look forward to fight Joseph Agbeko.

“Fighting Agbeko will give me the chance to be recognised worldwide and I can’t wait to take up that chance when it avails itself,” Patel said.

Meanwhile, Kisarawe says he would rather allow his fists to do the talking in the ring on Saturday and take the titles home to Tanzania.

“I want to win the titles and take them back home,” said Kisarawe yesterday. “I am undefeated in my last three fights and beating Patel will only help me extend that winning streak.”

The headline fight on the ‘Night of Championship’ has been put together by Soaq Empire Promotions and has other bouts expected on the bill.

The World Boxing Organisation’s (WBO) supervisor for Africa, Mr Samir Captan, said that the boxers were in good condition and ready to offer their best in the ring.

On the under cards, Issah Samir will clash with journeyman Frank Dodzi in a non-title middleweight bout, while Ghana's Osumanu Haruna and compatriot Ebenezer Tetteh will slug it out for the WBA Pan Africa heavyweight belt.