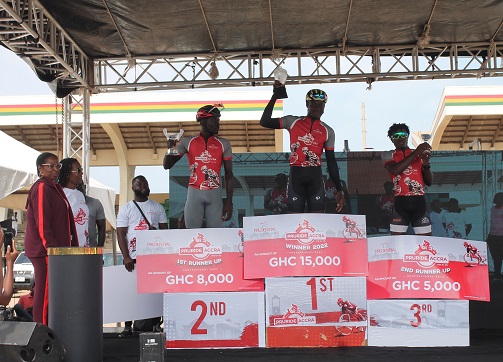 The winner Lawrence Adjei (middle) is flanked on the right by Anthony Boakye who came second and left by Frank Akuffo who placed third while the leadership of Prudential Life Insurance Ghana (left) look on
30.5k Shares

Favourite Anthony Boakye Danquah Boafo of River Park Cycling Club in the Bono Region was beaten by an Electrical Engineer, Lawrence Adjei, of Gladiators Cycling Club, in a photo-finish of the Elite Men's race of the Third PruRide Cycling Championship.

The event, staged across some principal streets in Accra yesterday, saw the 27-year-old Kasoa-born Adjei sprinting alongside the top sprinter to the finishing line before beating him to it. Adjei made it in a time of 2:27.32secs, while Boafo came second with a time of 2:27.42secs, with  Frank Akuffo of the Boss Tribe Cycling Club taking the third position.

The event, which covered a total of 99km with a lap of 5.2km over 19 laps, saw many cyclists competing for honours after setting off at the Independence Square in Accra.

In the Elite Women's division, Nigeria’s Ese Lovina Ukpesera emerged winner and received GH¢1,000 for her effort. She was followed in the second and third positions respectively by Elena Holl and Clementina Ayoun.

Commitment
The Chief Corporate Affairs Officer of Prudential Life Insurance Ghana, Ms Rosalind Brown, said her outfit organised the event as part of its Corporate Social Responsibility for the youth to generate a keen interest in the sport and keep them healthy.

"We are committed to making Ghanaians healthy and fit through this competition, and we hope we have achieved that. PruRide will continue enlightening Ghanaians to resort to cycling and other forms of riding to keep fit and healthy," she told Daily Graphic.

She congratulated the cyclists and urged the spectators to emulate them to promote good health.