Work together for victory in 2024 - Atamudzie urges NDC members 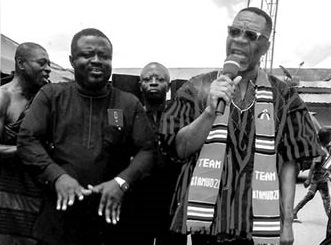 The Eastern Regional First Vice-Chairman of the National Democratic Congress (NDC), William Atamudzi, has called on party members to bury their differences, eschew arrogance and work relentlessly to ensure the party’s electoral victory in the 2024 general election.

He stressed that the current economic hardships facing Ghanaians was a clear indication that the ruling New Patriotic Party (NPP) had failed the nation.

Mr Atamudzi made the call when he addressed an NDC constituency political rally at Akyem Manso in the Eastern Region last Friday.

He said the high cost of living was an ample demonstration of the failure of the NPP administration due to lack of vision and ideas.

“People cannot get three square meals a day, let alone decent accommodation as a result of the mismanagement of the national resources by the NPP government which has brought chaos and strikes by workers,” he emphasised.

He, therefore, called for a national dialogue to infuse new ideas to efficiently handle the affairs of the nation.

Mr Atamudzi said the next NDC government in 2025 would empower the youth to work tirelessly to help revamp the economy to alleviate the suffering of Ghanaians.

A leading member of the NDC in the Asene-Akroso-Manso Constituency, Isaac Kofi Ahimah said even though everything pointed to an NDC electoral victory in 2024, members of the party must intensify their political campaigns in order to achieve their cherished ambition.

He advised NDC members to vote for loyal, popular and hardworking people in the upcoming constituency elections.

Bernard Ntiamoah, the constituency communications officer of the NDC, praised the constituency executive members chaired by Edward Ansah for rebranding the party to be attractive to the masses and urged them not to relent on their efforts.