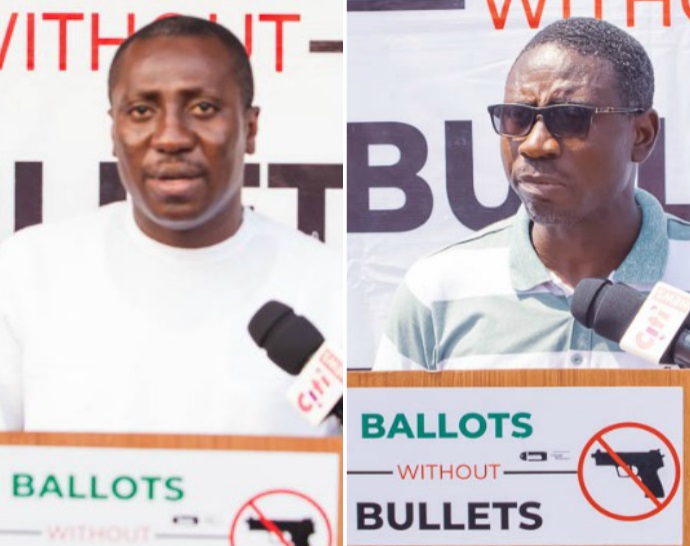 The Parliamentary candidates for both the New Patriotic Party (NPP) and the National Democratic Congress (NDC) have pledged their total commitment to peace ahead of the December 7 elections.

Speaking at an event dubbed “Ballots Without Bullets” organized by the National Commission on Small Arms and Light Weapons (NACSA), both candidates reiterated the need for a violence-free campaign and election in order for Ghanaians to continue to enjoy peace and stability.

The NDC candidate, Mr James Kofi Annan, advised his followers to be law-abiding citizens and to desist from any violent behaviour or act that will put the name of the party in any disrepute.

“I do not want anyone following me to engage in any violence. You have to be law-abiding and to commit to peace. My party members and I commit to peace”.

According to him, a country’s development is dependent on the peace and stability that comes with it.

“I do not think there is any other wat for the people to express their views apart from the ballot box. Let me, therefore, say that I am committed to a peaceful election”, he said.

Speaking on behalf of the Small Arms Commission, the Executive Secretary, Mr Jones Applerh revealed that the “Ballots Without Bullets” Campaign is the Commission’s way of contributing to a non-violent election.

He stressed on the need for Ghanaians to be tolerant of each other’s views and opinions and not resort to violence at the least provocation.

Both candidates were presented with plaques as a sign of their pledge to peace before, during and after the elections.

The Ballots Without Bullets Campaign is in collaboration with the United Nations Development Program and the German Federal Foreign Office. It is a public education and sensitization program to educate the public on the need for a peaceful and violent free elections.