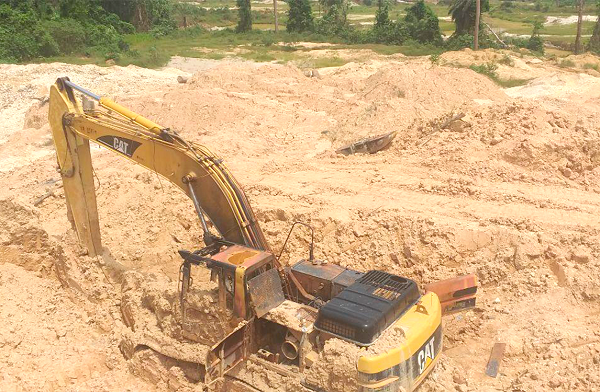 An excavator at one of the mining sites Follow @Graphicgh

The chiefs and people of Wassa Akropong in the Wassa Amenfi East Municipality of the Western Region have called on the government to empower the municipal assembly and traditional authorities to regulate mining activities in the area.

They said it would be a more effective means of managing the activities of small-scale miners, mainly Chinese, and the threat they posed to the environment than the current freeze on mining and the periodic visits of Forestry Commission officers.

In spite of the ban on mining, there are indications of clandestine mining activities but the assembly and traditional authorities seem powerless to effectively regulate these activities.

In interviews with chiefs, opinion leaders and residents of Wassa Akropong as a sequel to a recent townhall meeting, many blamed the devastation of lands and river bodies in the area on the involvement of Chinese nationals engaged in mining in recent years.

Abakomahene of the Wassa Amenfi Traditional Area, Nana Owedie Krokoo Ansah II, reckons that the Chinese arrived in Wassa Akropong about five years ago mainly to do galamsey.

Prior to their arrival, Wassa Akropong had seen gold mining since the 1970s, registering the operations of big mining companies, along with galamsey. The Chinese joined in the small-scale mining with sophisticated and heavy equipment and with it the advent of destruction.

A radio presenter at Wassa Akropong, Mr Matthew Mensah, argued that the locals in galamsey did not destroy water bodies because they did not use sophisticated machinery.

"When our people mined without sophisticated technology and equipment, we could still drink from our river bodies and there were no pits. However, with the coming of the Chinese, we saw the introduction of technology and heavy equipment such as excavators that can dig a large portion of land in an hour. We cannot blame them solely, because we had no idea what arrangements government authorities had made with them regarding reclamation. There are many lands they have destroyed without reclamation”, he said.

He indicated that the Chinese presence had not been all negative. Many of the youth got employed and this directly impacted families. According to him, the negatives have had devastating impact.

A cocoa farmer at Wassa Akropong, Mr Nicholas Nyame, who has been into farming for over 40 years, lamented how the activities of the Chinese had destroyed their lands and water bodies.

“As a cocoa farmer I can say activities of the Chinese are sometimes devastating. Their mining activities have destroyed our farm lands. They also do not reclaim the lands leaving pits open. These pits hold water and sometimes people fall into them and die”, he said.

For Nana Kumi Daffour, the Constituency Organiser of the New Patriotic Party (NPP), the assembly and traditional leaders must be empowered to enforce the laws, including making sure that miners pay for reclamation or they were refused new mining permits.