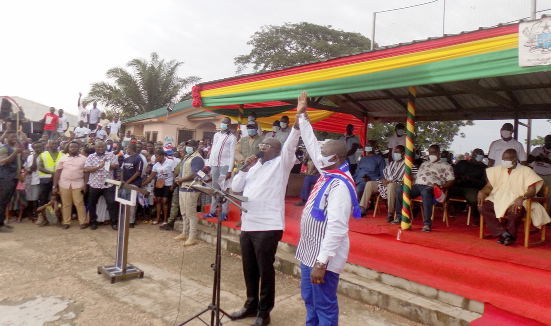 The Vice President, Dr Mahamudu Bawumia, has called on the electorate not to vote only for President Nana Addo Dankwa Akufo-Addo but also the party’s parliamentary candidates on December 7, 2020.

That, he explained, would enhance the smooth administration and passage of laws to improve upon the lives of the people.

Addressing jubilant supporters in Akyem Oda at the Oda Old town durbar grounds, Dr Bawumia introduced Mr Alexander Akwasi Acquah, as the NPP parliamentary candidate for the Oda Constituency, and urged the electorate to vote for him to retain the seat for the NPP.

The supporters in party colours and paraphernalia amid drumming, chanting NPP slogans and dancing through the principal streets of Oda, later converged  where the Vice President and his entourage addressed them.

Dr Bawumia commended the supporters for the massive turn up and urged them to translate their support into votes in the upcoming general election in order to retain President Akufo-Addo in power for the next four years to continue the provision of quality development projects.

He said unlike the National Democratic Congress (NDC), the NPP government had initiated many social intervention programmes to revamp the national economy so as to create jobs for the unemployed people.

He mentioned some of the interventions as one district one factory, planting for food and jobs, the free Senior High School, restoration of teachers and nurses training allowances and recruitment of more teachers and the Nation Builders Corps.

He advised the people not to give the NDC any chance to come back to power to dissipate the resources accumulated through the hard work of the NPP.

Mr Osafo-Maafo enjoined the electorate to reciprocate the numerous development projects spread across the length and breadth of the country without discrimination on political lines, to retain the NPP in power for the next four years in order to continue to enjoy more of such quality projects.

The Krontihene of  the Akyem Kotoku Traditional Area, Obrempong Gyamfi Saforo Kyereh, commended the government for providing numerous development projects for Akyem Kotoku in particular and Ghana in general.