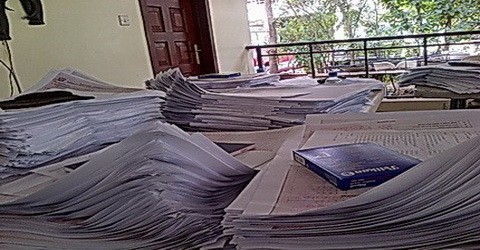 The Supreme Court has ordered that audit firm KPMG counts pink sheet exhibits of presiding judge, Justice William Atuguba as a controlling measure against the number of pink sheets provided the court’s registry by petitioners in the ongoing election petition hearing.
The exact number of pink sheet exhibits before the court and parties have been disputed by Mr. Tsatsu Tsikata, counsel for the third respondent in the case in which three members of the New Patriotic Party are challenging the outcome of the 2012 presidential elections.

Counsel Tsatsu Tsikata says the petitioners cannot be correct in their claim that they had sent 11,842 pink sheet exhibits to the court because he had not been served that much and called for an audit.

He did not respond to Mr. Philip Addison, lead counsel for the petitioners’ request to state how many pink sheets he had served.

On Wednesday, the court said counsel for the petitioners had objected to the counting of the presiding judge’s lot of the pink sheets on the grounds that it had never been part of directions to KPMG for the audit.

However the court affirmed that that was its position, for KPMG to cross check the count with the presiding judge’s lot.

The NPP presidential candidate for the 2012 elections, Nana Akufo-Addo, his running mate Dr Mahamudu Bawumia and NPP chairman, Jake Obetsebi-Lamptey have petitioned the Supreme Court to annul over 4.5 million votes for alleged irregularities and malpractices and consequently overturn the declared result in favour of Nana Addo.