Stay out of politics - CR Minister urges staff of MMDAs 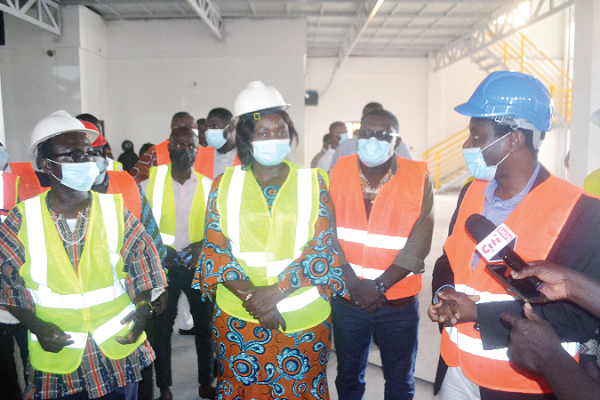 The Central Regional Minister, Mrs Justina Marigold Assan, has urged staff of Metropolitan, Municipal and District Assemblies (MMDAs) to desist from engaging in partisan politics at their workplaces to propel the growth of the Central Region.

According to her, as technocrats, what was required of staff of the various MMDAs was for them to bring their rich experience and expertise to bear to support the government to deliver on its social contract with the citizenry.

Mrs Assan was speaking while interacting with staff of the Gomoa East and Effutu Municipal assemblies as part of a day’s working visit to both areas since assuming office as  regional minister.

The others were the Rikpat Limited at Akotsi, a lubricant manufacturing company and the Veride Energy Africa, an engine oil company located at Gomoa Nkwantanan.

Mrs Assan said the extension of extreme partisan politics to the MMDAs was a major threat to the growth and development of the region.

“What we expect from you is the needed professionalism, commitment and hard work that would enable the government to properly implement its policies and programmes intended to bring relief to the ordinary masses,” she added.

She informed them of the punitive actions that could be taken against them if they were found doing politics with their work and advised them to desist from acts that had the tendency to make them fall foul of the law governing their work.

“Irrespective of the political party that you are inclined to, your utmost duty as a technocrat is to discharge your professional duties devoid of partisan considerations to enable the government to achieve its vision,” she stated.

Mrs Assan urged the MMDAs to devise innovative ways and strategies to shore up their Internally Generated Funds (IGF) in a bid to wean themselves off the District Assemblies Common Fund (DACF).

“Currently, in the absence of the DACF, many district assemblies are seriously distressed and cannot do anything at all and that it is important that assemblies up their local revenue mobilisation for their own benefit.

“It is important for MMDAs to empower revenue collectors to go the extra mile to rake in more revenue for the assemblies to enable them to fully function even in the absence of the DACF and other external funding support,” she noted.

Mrs Assan further charged district assemblies to institute awards scheme to reward hard working and deserving staff to boost their morale to work hard towards the transformation of their respective districts.

The District Chief Executive for Gomoa East, Mr Solomon Darko Quarm, said the young assembly, which was created in 2018, would continue to do more to transform the lives of the people.

For his part, the Municipal Chief Executive (MCE) for Effutu Municipality, Mr John B. Ninson, commended the staff for their continuous dedication and commitment towards the progress of the area.