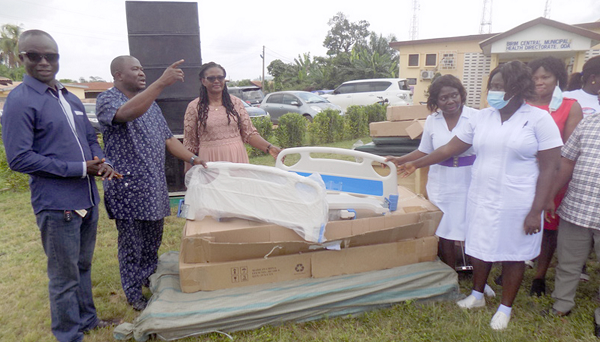 The Member of Parliament (MP) for Akyem Oda, Alexander Akwasi Acquah, last Tuesday donated a quantity of medical equipment worth GH¢30,000 to four CHPS compounds in his constituency at a ceremony at Oda.

The beneficiary CHPS compounds are located at Jamaica, Mawuli, Nyankumasu, all suburbs of Oda and Essam.

Making the presentation, Mr Acquah said during his working visit to some health facilities in the constituency, he realised that the four CHPS compounds lacked some medical equipment so he decided to purchase the items for them with his share of the health insurance fund.


He stressed that the gesture was to supplement the government’s efforts to equip health facilities to enable them to provide quality healthcare delivery for the people.

He advised the health personnel of the beneficiary CHPS compounds to take proper care of the items and utilise them to cater for the health needs of the people who patronised the facilities.

The MP enjoined them to observe strict maintenance culture for the items to last longer.

The Deputy Director of Health Services in the Birim Central Municipality, Grace Danquah who received the equipment on behalf of the beneficiary CHPS compounds, thanked the MP for the gesture and promised that they would use the items to improve healthcare delivery at the facilities.

The Municipal Chief Executive (MCE) for Birim Central, Ms Victoria Adu, who chaired the function, was grateful to Mr Acquah for his commitment to health promotion in the municipality.

The function coincided with another donation of nutritious food items and drugs valued at GH¢10,000 from the Municipal Directorate of Social Welfare Department for five malnourished babies in the municipality which was also funded by the MP, Mr Acquah.

The MP and the MCE, Victoria Adu, took turns to present the items to the mothers of the malnourished babies.

Mr Acquah also promised to take medical care of the five babies until they grew up and therefore urged their parents to seek regular medical examination and treatment for the babies at his personal Community Hospital at Oda.

The Municipal Director of the Social Welfare, Mr Ernest Otu Opare, on behalf of the beneficiary parents, thanked the MP for the gesture.

He explained that on seeing the poor health condition of the malnourished babies, he readily came to their aid by purchasing the items for them to grow up as normal human beings.