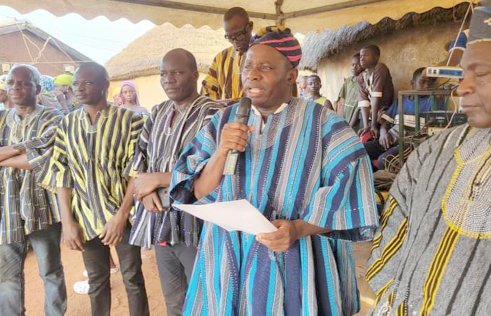 The North East Regional Minister, Yidana Zakaria, has called on the chiefs and people of the region to sustain the relatively peaceful climate for development to thrive in the area.

He said many parts of the region had experienced intermittent communal conflicts, which had been a major concern for years and hindered the development of the area.

"Conflict and development are mutually exclusive, so until we are able to address the issues of pockets of conflicts in the region, there can never be any meaningful development. Let's collectively fight poverty which is our biggest enemy," he said.

Mr Zakaria made the call at the celebration of this year's Damba festival by the chiefs and people of the Yunyoo Traditional Area last Monday.

The event brought together all chiefs, sons and daughters of the area, to showcase the unique, rich and time-tested culture and traditions of the Mamprugu Kingdom.


Participants were treated to an exciting rendition of Damba dance moves.

To maintain law and order, Mr Zakaria said the Regional Security Council (REGSEC) would continue to liaise with the traditional authorities to resolve all outstanding disputes.

"While we keep mobilising human and material resources for development, we must also note the overarching need for political stability to consolidate the gains made in our democratic journey," he stated.

The regional minister reiterated the government's commitment to bringing the needed development to the people.

He added that "internal roads in Yunyoo will be tarred to befit its status, ridges at Tuna, Mozio and Bunbuna will also be fixed during this dry season to ease the movement of goods and people. The Yunyoo-Gbaduri road is one of the critical roads to be considered for tarring under the critical roads project."

For his part, the Paramount Chief of the Yunyoo Traditional Area, Naa Dauda Yamyia Tooka II, thanked the government for initiating a number of interventions, which were impacting on the lives of the people of the area.

He, however, appealed for the speedy completion of ongoing projects to help ameliorate the plight of the people.

He also called on all sons and daughters of the district and beyond to lend their support in whatever way possible to enhance the development of the district.