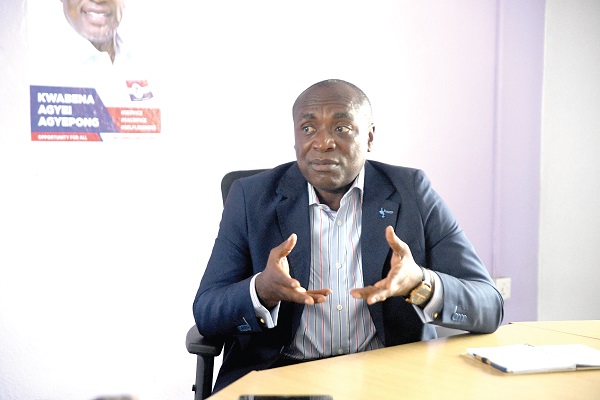 AN ASPIRING flagbearer of the New Patriotic Party (NPP), Kwabena Agyei Agyepong, has said the party currently needs a new generational leader to chart a path for the growth of the NPP.

Such a visionary leader is needed to create a new dawn of understanding and purpose for public service.

“I think it is time for a new generation leader, a leader who will create a new dawn, a new understanding of what public service means and what party politics should deliver for Ghanaians.”

“This election is a watershed. The NPP has had 16 years of the same ticket, we need to have a clear departure from that which means we need fresh set of ideas and all will be premised on our cherished values of service, sacrifice and selflessness,” he stressed.

Describing himself as the only candidate with the “skillset” to bring that kind of leadership to the party, Mr Agyepong, who spoke exclusively to the Daily Graphic in Accra last Friday said, “the time has come for this country to look at a new dimension to recalibrate our values and to reorient ourselves so we have leadership that thinks, cares and loves people”.

That, he explained, was because the centrality of party politics and governance was the welfare of the ordinary citizen and said politics should be anchored on service, sacrifice and selflessness.

Mr Agyepong indicated that President Nana Addo Dankwa Akufo-Addo and Vice-President Dr Mahamudu Bawumia had since 2008 been at the helm of affairs of the party and there was a crying need by the party faithful and Ghanaians for an injection of new ideas and energy to impose order and discipline in the country.

He, therefore, reiterated his call for the downsizing of government which he said made it more efficient and effective and allowed the President to have a handle on how things were happening and also demand more from his team.

“It is those character traits that I bring to the table, being visionary and decisive, being prepared to take difficult decisions and making sure that there is compliance in all aspects of our national life,” he stated.

Mr Agyepong, who was the press secretary to former President Kufuor and also a former General Secretary of the NPP, said his message was resonating positively with the party faithful wherever he had been and called on the other aspirants to submit themselves for enquiry so that their ideas, policies and records would be scrutinised.

He said: “The clarion call is to go into government to serve society, not to be served.”

He said it was not for nothing that President Akufo-Addo invited him to support his re-election, an action he said “goes to show that what happened was all orchestrated and calculated to destroy my political career”.

“In this country, when you are upright, strong and firm, you will come under a lot of persecution and I am happy that till date nobody can accuse me of misappropriation or misapplication of party resources or funds.

I have a clean record, genuine motives and I want to serve this party and our country to the best of my ability,” Mr Agyepong added, pointing out that “the difficulty in our politics now is we have become “enablers” meaning people hero-worship leaders and political appointees.”

He observed that there was too much sycophancy, praise-singing and hero-worshipping and said “we need to revive the confidence people must have in the political architecture because we do not have to endanger our democracy,” which he said was the best option to govern ourselves.