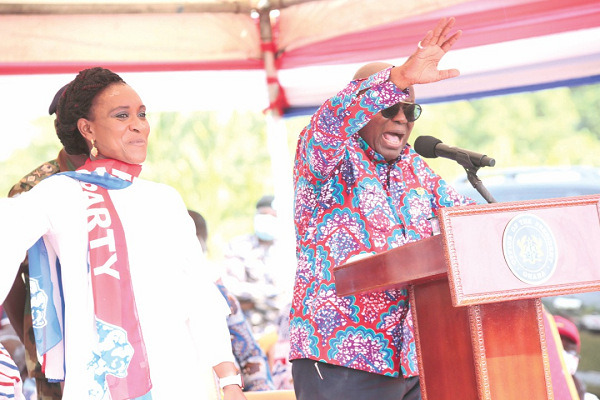 President Nana Addo Dankwa Akufo-Addo has stated that the New Patriotic Party (NPP) has a blueprint for the accelerated development of the country and urged Ghanaians to vote massively for the party on December 7, 2020 to concretise it.

“The New Patriotic Party has got a blueprint for the development of the country and it is going to be concretised in Akufo-Addo’s second term as the President. That is the programme ahead of us and for our country,” he stated.

Addressing a mammoth rally at Tafo in the Abuakwa North Constituency, President Akufo-Addo said the party had in the last four years laid the foundation for the execution of the blueprint and would use the next four years to provide unprecedented development for the rapid socio-economic transformation of the country.

In the Abuakwa North, Atiwa East, Atiwa West and Fanteakwa North constituencies, he introduced the parliamentary candidates for the area.

President Akufo Addo, who was the first NPP Member of Parliament for three consecutive times for Abuakwa from 1996, which was later divided into Abuakwa North and South, added that “I can say that my political career begun here at Tafo”.

“Anytime I come to Abuakwa North, I have fond memories of a lot of exiting periods, especially the votes you continuously gave me when I was your MP. But for you, I would not be where I am today,” he told the supporters.

President Akufo-Addo said when he was seeking the mandate of the people to become the President of the country, he made some promises and based on that they voted for him and asked them to consider his truthfulness, integrity and delivery on his promises, to vote for him again.

“I never came to lie to Ghanaians, I have not deceived anybody in Ghana, therefore, look at the work I have done and offer me another chance to continue my work. Let the ‘Four More for Nana Work,” he stated.

He said Ghanaians would witness greater economic boost, more infrastructure development and progress in their lives in his second term of office.

President Akufo-Addo explained the party would also need a greater majority of Members of Parliament to help in the execution of its agenda and said that required they voted for the NPP parliamentary candidates.

He said the party did not recognise any independent parliamentary candidate and advised the people to vote for only those representing the elephant.