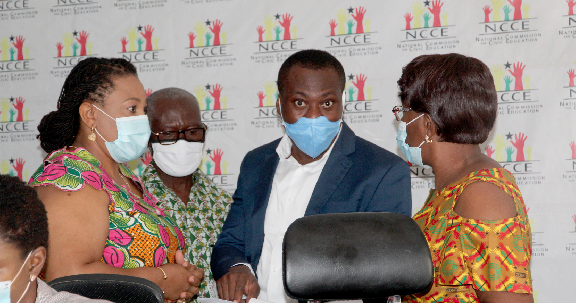 The National Commission for Civic Education (NCCE) has cautioned religious leaders against pronouncements of political prophesies which, it said, could spell doom for the country.

At a news conference in Accra yesterday, the Chairperson of the commission, Mrs. Joesphine Nkrumah, also called on traditional rulers to be circumspect in their utterances during the political season.

She said traditional leaders, like religious leaders, wielded a lot of influence, and, therefore, anything they said had the potential to divide the country.

Mrs. Nkrumah said the NCCE was worried about the utterances and actions of chiefs which lent support to political parties.

Citing examples of chiefs banning other political parties from campaigning in their jurisdiction, the NCCE head described the practices as unconstitutional, saying “chiefs are one of the institutions to call on in times of crisis, and so we must be worried”.

On this year’s elections, the NCCE Chairperson advised political parties to be decorous in their activities and utterances, and called on the electorate to condemn electoral violence.

Mrs. Nkrumah also touched on the subject of the Western Togoland seccessionists, and disclosed that the commission was troubled by the recurrence of attacks by the group which, she said, continued to threaten the security, sovereignty and democracy of the country.

She expressed reservation and the displeasure of her outfit about activities of the group, saying it contravened Article 41 of the country’s Constitution.

Mrs. Nkrumah, therefore, called for a multi-faceted approach in tackling the issue of the seccessionists, stressing that “we need a lasting solution so it does not generate into a national crisis”.

She also appealed to the media and Ghanaians in general not to politicise the issue, but to be measured in the information they put out on the development, pointing out that “Ghana is a cohesive nation, and nothing or nobody must seek otherwise”.