Kufuor, others commiserate with Rawlings 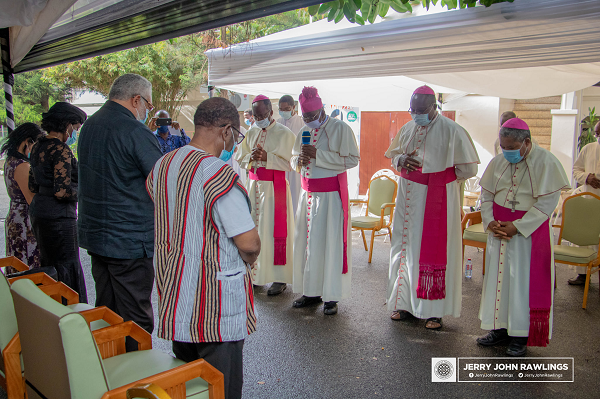 A number of high profile personalities and institutions continue to commiserate with former President Jerry John Rawlings and his family on the demise of Madam Victoria Agbotui, mother of the former President.

“The country has been informed of the loss of a matriarch and the mother of our President, President Rawlings. Of course in our society, the matriarch plays a very important role. The matriarch is an arbiter of peace and a store of knowledge for the family,” it quoted Mr Addo Kufuor to have said.

Mr Rawlings with members of the Military High Command

It said the Chief of Defence Staff (CDS), Lieutenant General Obed Boamah Akwa, who led a delegation of the Military High Command to express their condolences to the former President and his family, stated that the High Command was saddened by the news of the death of Madam Agbotui.

“Mothers are very special persons and they give encouragement, enlightenment and take care of us from the cradle to the grave. The loss of a mother is an occasion for great regret. Take consolation in the fact that it is a call to higher glory,” Lt. General Akwa stated.

The statement said Lt Gen. Akwa also assured the former President and his family that the Ghana Armed Forces (GAF) stood in readiness to offer every support necessary to ensure the success of the funeral of Madam Agbotui.

The statement said the President of the Ghana Catholic Bishops’ Conference, Most Rev. Philip Naameh, who led the delegation, prayed that the Good Lord grant, former President Rawlings and the Agbotui family comfort and courage to accept the loss.

It said the GCBC made a donation towards the funeral.

The President of the GJA, Mr Affail Monney said, “the loss of a mother, regardless of the age can inflict destabilising consequences, so we are here to console him and tell him that his loss is our loss and we stand by him”.

The statement said Ambassadors Dan Abodakpi and Victor Gbeho alternated in thanking the delegations and informing them of the funeral arrangements scheduled for Saturday, October 24, 2020 in Accra and Dzelukope.