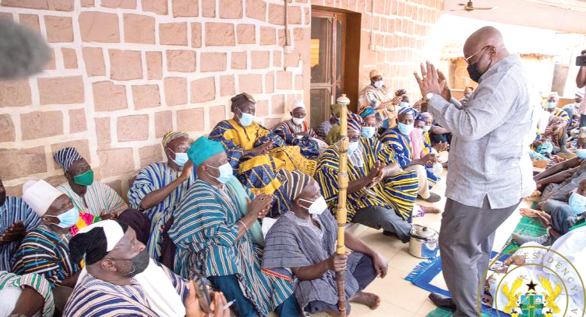 He said the appointment of the Member of Parliament (MP) for Walewale for the cabinet position and many other persons from Mamprugu showed that the president had the people at heart.

“The people of Mamprugu will forever remain grateful to you for including us in your government; your name will remain indelible in the history of the land,” he said.

Naa Bohagu said this when President Akufo-Addo paid a courtesy call on him at the Nayiri Palace in Nalerigu last Saturday as part of his tour of the North East Region.

Hajia Lariba was nominated as substantive sector minister to replace Sarah Adwoa Safo who was last week removed by the President.

She is the New Patriotic Party (NPP) MP for Walewale in the North East Region. Her nomination is subject to approval by Parliament.

The Minister of Sanitation and Water Resources Cecilia Abena Dapaah, has been a caretaker minister for the Gender sector following the leave of absence of Sarah Adwoa Safo last year.

Aside from the appointments, the Nayiri noted that the implementation of a number of pro-poor interventions such as the free Senior High School Education, Planting for Food and Jobs, One-District- One-factory, One-constituency-One Ambulance, expansion of the National School Feeding Programme, among others were turning around the fortunes of the people of the area.

He, however, appealed to the government to provide the security agencies with adequate logistics to help fight crimes as well as complete all stalled projects in the region.