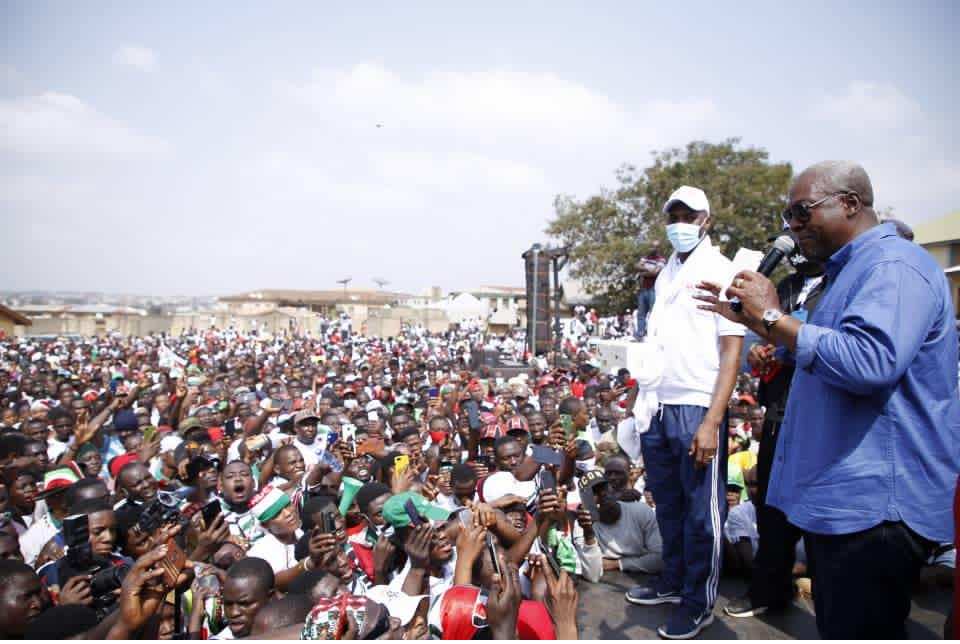 The Presidential Candidate of the National Democratic Congress (NDC), former President John Dramani Mahama has directly accused his contender for the 2020 presidential election of taking voters in the Ashanti Region for granted in spite of their support for him and his party over the years.

Mr Mahama said although voters in the region voted massively for Nana Addo Dankwa Akufo-Addo and the New Patriotic Party (NPP) to win the 2016 elections, the President had failed to return their support through projects and policies that would enhance their livelihoods and uplift Asanteman.

He said by failing to initiate new projects and continue with those that were started by the NDC in the region, President Akufo-Addo was indirectly saying that voters in the NPP's stronghold would still vote for him and the party irrespective of the impact of his leadership on their livelihoods.

He said this was not right, as the President did not have an automatic right to a second term.

He said due to the lack of projects and the slowdown of general development in the region, voters in the region must retaliate with their votes by voting the President and NPP out of power.

He made the rallying call on voters at a rally at Aboabo in the Asawase Constituency in the Ashanti Region Sunday.

Addressing the gathering Sunday morning, the former President said voters in the region must change their voting pattern and vote for the NDC to comeback and continue with the massive infrastructure projects in the region and the inclusive development.

He said this was necessary because the NPP government under the current President takes "Ashanti votes for granted ".

"Nana Addo takes your votes for granted and that is why he ignored you after the election in 2016."

"He doesn't have an automatic right to a second term so return the party that brings you progress back into power," he said.

Mr Mahama said voters in the region must not be influenced with tokenism on election day to vote for the NPP, adding that their votes are not for sale.

He said such actions of doling out freebies to voters in the region ahead of the elections were an indictment on the intellects of the voters and further advised them to accept the gifts but exhibit their wrath against such actions on December 7.