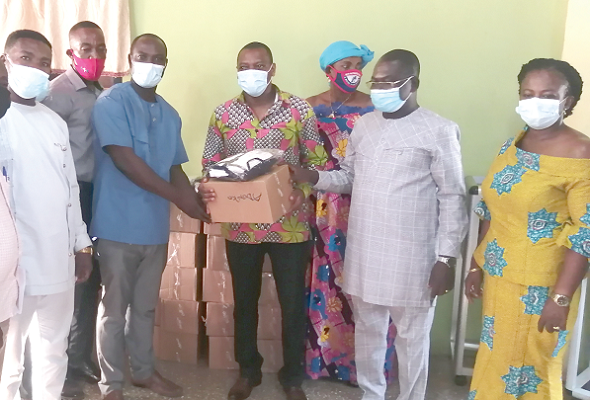 The New Patriotic Party (NPP) Member of Parliament for Kwadaso, Dr Kingsley Nyarko, is seeking the assistance of assembly members of the Kwadaso Municipality to support the education on the COVID-19 pandemic and the need for the people to adhere to the protocols.

He was of the view that if the leaders within the communities got involved in the fight, it would be easier for the people to also buy into the idea and comply.

Consequently, the MP has held a meeting with all the assembly members, the Municipal Chief Executive and the Municipal Director of Health for members to deliberate on the way forward.

It was also to enable the health director to brief the members of the COVID-19 situation in the municipality and the measures put in place to fight the menace.

Addressing the meeting, Dr Nyarko observed that the rate at which the new variant of the virus was causing havoc, it was necessary that all stakeholders came together to tackle it.

As the MP for the area, he expressed his commitment to partner them to fight the pandemic until it was completely gone.

Briefing the assembly members, the Kwadaso Municipal Director of Health, Mrs Grace Billi Kampitib, said as of February 15, 2021, the municipality had taken the samples of 366 with 92 of them testing positive.

Out of the number, she said, 48 of them were male while 44 were female.

She said 41 of the patients had recovered leaving positive active cases of 47 with four deaths.

Currently, she said, Kwadaso ranked among the top six districts that had been identified as the hotspot of the virus in the Ashanti Region.

The Kumasi metropolitan area, Oforikrom, Asokwa and Obuasi East are the top four hotspots in the region and record the highest number of infections in the region.

She said even within the municipality, certain areas had been found to have high numbers of infection rates and cited Kwadaso Central as one of such areas.

As part of the efforts to improve on the management of COVID-19 cases in the municipality, she said, the SDA Hospital, a Christian Health Association of Ghana (CHAG) facility, which served as the district hospital, had been provided with a CPR kit to run the test there.

Mrs Kampitib said even though the laboratory was ready to run the test, it was waiting for the certification from the Health Facilities Regulatory Agency (HeFRA) to start running the test of suspected cases of COVID-19.

She said when certified to run the test, it would greatly reduce the waiting time for patients to know their status and be put on the appropriate treatment plan.

The Presiding Member of the Kwadaso Municipal Assembly, Mr Samuel Kwaku Gyasi, was grateful to the MP for organising the meeting to deliberate on how to fight the pandemic.