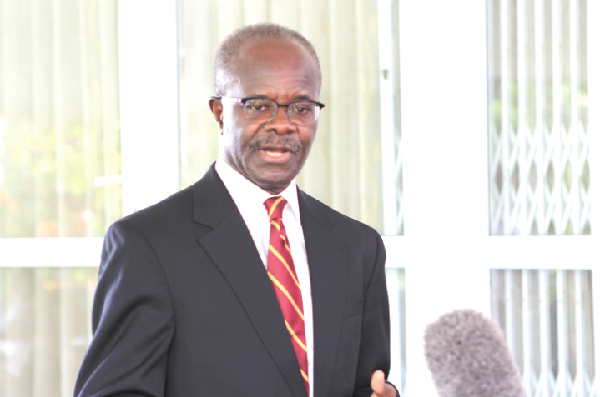 Ghana will be going to the polls on December 7, this year to elect the next president. One of the contenders tipped to be among the favourite to win Wednesday’s polls is Dr Papa Kwesi Nduom, a business mogul, who is standing on the ticket of the Progressive People's Party (PPP).

Regarded as one of Ghana's most successful entrepreneurs of our time, Dr Nduom, nicknamed "Edwumawura," is a fine gentleman who has a strong passion and unquenchable thirst to make a change in his environment.

He considers himself as "a simple man who has so much love for his country and desire to help improve where he can".

" When I wake up in the morning, the first thing I think about is what can I do better? Who in my circle needs my attention?

Which part of me am I required to sow as a seed in somebody's life?. Is it money people need or is it opportunity they are praying for?" a routine question Dr Nduom ponders about daily.

To him, a fulfilled life is the one that lived with a purpose not the one that drives the best of cars, lives in a million dollar mansion or has billions of cedis saved in his account.

He attributes the person he has become to how he was brought up by his parent.

Growing up at Elmina

Born on February 15, 1953 at Tertekessim, a small town at Elmina in the Central Region, Dr Nduom is a son of two teachers. He is the second son with six female siblings.

His mother and father (both deceased) taught him to live by integrity and discipline right from his childhood.

Dr Nduom and his other siblings were not allowed to lie as every attempt to do so was made a painful memory for them. His late father, Mr Joseph Hubster Yorke, knowing the impact a lie could do to his future, had to use pain to teach Dr Nduom to live right.

"My parents hated lies so passionately that they trained me and my other siblings to also hate it. It is so hard for me to continue being nice to a person who keeps telling lies. All my employees know how ruthless I am in my attempt to deal with a liar. This is what is missing in our society and government. Everybody is telling lies and we seem to treat it as if it is so normal," he told this reporter.

Political career
Dr Nduom's political ambitions continue to surprise many Ghanaians who perceive him mainly as a businessman. A lot of people are still struggling to understand why such a successful business and wealthy man should meddle in politics because in their minds " politicians are liars and deceivers who are only interested in looting state resources".

Dr Nduom started his political journey in 1997 when he stood for elections at the Akotobinsin Electoral Area and won massively as Assembly Member for the Komenda-Edina-Eguafo-Abirem (KEEA) Electoral Area.

In the December 2000 elections, he was again fielded as the candidate of the Convention People’s Party (CPP) for KEEA Constituency but lost to Dr Ato Ouarshie of the NDC.

Recognising his competence and the level of his uniqueness, Dr Nduom was appointed by the then President John Agyekum Kufuor of the New Patriotic Party (NPP) as the Minister for Energy.

In 2004, Dr Nduom again was fielded as the candidate of the CPP for KEEA constituency and won the seat for the party. At the time, he served as the chairman of the Organising Committee of the CPP. Early in President Kufuor's second term of office, Dr Nduom became the Minister for Public Sector Reform. He continued in this capacity till July 2007 when he resigned from government to seek his party's nomination to stand as the presidential candidate.

Even though the CPP ticket did not do well as expected, it was believed that Dr. Nduom contributed greatly to the about one per cent of votes the party obtained.

In 2012, he broke away from the CPP to form the PPP following disagreements with some members of the national executive on the direction of the party. After the PPP's first national delegates conference, the party chose Dr Nduom and declared him the PPP’s flag bearer for the 2012 general election.

Although the party had less than a year to campaign for the elections, Dr Nduom managed to place third among six other candidates including the current President, Mr John Mahama of the NDC, and Nana Addo Dankwa Akufo-Addo who is also vying for the same position on the ticket of NPP in this year's election.

Dr Nduom explains that his decision to form PPP had nothing to do with his desperation to become the president at all cost.

Rather "it is my passion to see a change considering the fact that the current crop of politicians have failed Ghana many times".

Dr Nduom believes the birth of PPP will change the phase of politics in Ghana in the next few years to come.

"We are bringing on board the next batch of politicians who are trustworthy, honest and selfless. People whose only goal is to help build their nation irrespective of the price they have to pay,"

Going into election 2016, Dr Nduom is confident that Ghanaians have bought into the idea of a change of government and are anxiously waiting to bring the PPP to power in the December 7 polls.

"Everyone is crying for a change. Ghanaians are tired of bad governance from the NDC and the NPP. The youth need jobs, businessmen and traders are hoping for a better economic environment. What PPP is promising is a solid economy that will put a smile on the face of every citizen," he said.

Apart from businesses and politics, Dr Nduom is an ardent Catholic who never misses fellowship with other believers every Sunday. Wherever he finds himself, he will look for a Catholic church to fellowship. For a hardworking man like Dr Nduom, one would think he doesn't have any time to "enjoy life". He is fun to be around, throws jokes once a while and loves to read all the time. He is also a good golfer and tennis player.

His advice to Ghanaians ahead of the election is "Do not do the same thing and expect a different result. Change the way you vote and you will get a better life. PPP is only into this race to help build a strong economy and I will urge all the electorate to rally behind me during the December 7 polls".