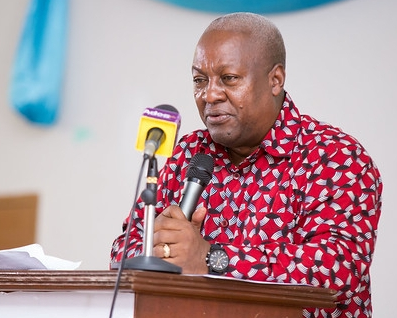 The National Democratic Congress (NDC), Presidential Candidate for the 2020 general election, former President John Dramani Mahama, has applauded the party’s representatives in Parliament for winning the Speakership after a hotly contested election in the Chamber of Parliament on January 7.

Mr Mahama said their display of unity was purposeful and contributed to their victory on the morning of January 7.

“This is what unity of purpose can do. They say divided we fall and that there is no force that can defeat a people who are together and are united and have a single purpose,” Mr Mahama said.

The former President made the remarks when he hosted the 137 NDC Members of Parliament (MPs) and some leaders of the party to a lunch event last Friday in Accra.

Mr Mahama noted that the chaotic manner in which the election of the Speaker of Parliament was conducted, was a testament to how low the country’s democracy had sunk.

He said the snatching of ballot papers and the invasion of the chamber of parliament by armed military men had made the country look like a “banana republic.”

“It makes us look like a banana republic. Because you were there and you were emotionally charged, I am sure infamy of that event did not strike you but when you see it on TV again, you will see how low our democracy has sunk,” Mr Mahama said.

For her part, the vice-presidential candidate of the NDC for the 2020 election, Professor Naana Jane Opoku-Agyemang, thanked the members of the party and the MP for fighting gallantly to win the speakership of Parliament.

She assured supporters of the party that its leadership would not disappoint them but would rather deliver on its promises to the people even though the party found itself in a thorny situation currently.

“Let me specifically thank our voters, those who have put their trust in us and those who know that we will deliver. I know we will not betray their trust but just so they know we will deliver regardless of where we are, regardless of what is ahead of us, you have all fought a good fight and the fight has not been just by yourselves but by your family, by your friends, by the voters, and well-wishers even from the other side but I will not be complete if I do not, with all apologies, single out the female parliamentarians,” she said.

Meanwhile, the Leader of the NDC caucus in Parliament, Mr Haruna Iddrisu, revealed at the lunch get-together that the decision for all 137 NDC MPs to vote for the Speaker of Parliament, Right Hon. Alban Bagbin, was collectively taken with the leadership of the party well ahead of the night of voting.

“The decision was taken collectively in this room that we vote Mr Alban Bagbin. God stood with the party and God stood with HE John Dramani Mahama,” he said.
Mr Iddrisu said the NDC MP for the Asewase Constituency , Mr Mubarack Muntaka who was seen on live TV physically protecting the balloting process and later seen trashing the NPP MP for Tema West after the later snatched ballot papers during the counting process did not have his permission.

“To our MPs I can only say Kudos. So, let today be dedicated to Mr Muntaka.