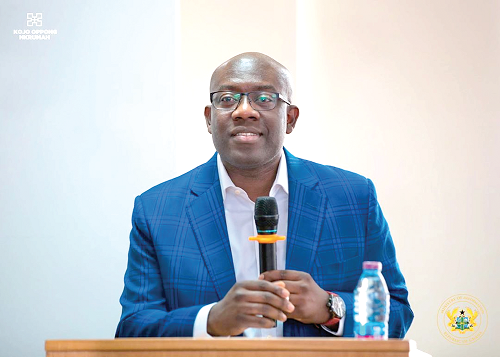 The Minister of Information, Mr Kojo Oppong Nkrumah, has urged actors in the Ghanaian political space to fashion out a mechanism to tackle issues of suspicion during election.

He said suspicion around election processes triggered huge mistrust among political actors and could serve as a basis of violence if not curtailed.

Mr Oppong Nkrumah, who is also the Member of Parliament for Ofoase-Ayirebi in the Eastern Region, was speaking at a three-day National Stakeholders Dialogue on countering “Post-2020 Election Violence and Building Consensus for Greater Political Tolerance in Ghana” held at Ada.

He urged the participants, to among other recommendations, come out with proposals that would deal with the phenomenon of suspicion around electoral processes.

Those individuals, he said, embarked on nefarious activities such as ballot box snatching and other activities that resulted in violence and associated offences.

The minister appealed to the media to play its fact-checking role well during the election process instead of amplifying the interest of parties, which sometimes generated tension and could lead to violence.

He said the role of the media in the electoral process was not to amplify the suspicions and interest of parties or players but to do that which the nation required of them such as subjecting claims put out by political actors to scrutiny through fact checking.

The United Nations Development Programme Resident Representative, Dr Angela Lusigi, while recognising the significant progress and good track record Ghana had chalked up on elections, said the country must recognise that evolving tensions, misunderstandings and pockets of violence had marred recent elections.

She said it was time to change that negative trajectory and show Ghana’s good example to the rest of the world.

Dr Lusigi appealed to the stakeholders to make good use of the opportunity to work collectively to consolidate Ghana’s democratic gains as a nation.

She said by committing to dialogue and peaceful means of resolving differences and misunderstanding, safe spaces would be created for a better future for all.