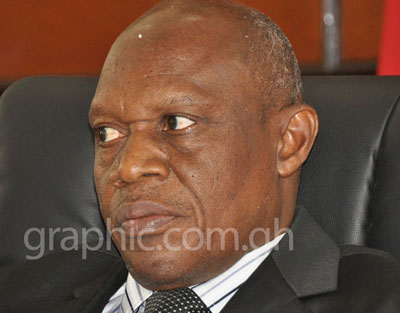 International audit firm, KPMG, yesterday tendered in evidence hard copies of a report on its audit of the pink sheets at the centre of the election petition challenging President John Dramani Mahama’s legitimacy.

A Partner and Head of Tax Audit of KPMG, Nii Amanor Dodoo, was led by Mr Justice William Atuguba to tender in evidence five volumes of the huge report.

Mr Philip Addison, Mr Tony Lithur, Mr James Quashie-Idun and Mr Tsatsu Tsikata, the lawyers for the petitioners, President Mahama, the Electoral Commission (EC) and the National Democratic Congress (NDC), respectively, did not object to the tendering of the document in evidence.

It was, therefore, marked as a court exhibit by the Supreme Court Registrar, Mr James Mensah, and labelled as exhibits 1, 1A, 1B, 1C and 1D.

Before the tendering of the document, Mr Tsikata had prayed the court to allow the report into evidence through the normal court procedure, but Mr Justice Atuguba initially held a different view, on the grounds that the parties knew and had consented to the source of the documents.

The president of the court said the court was treating KPMG “gingerly” because the sacrifice it had made in carrying out the auditing for free was unprecedented and also the report was not in dispute.

Mr Dodoo initially appeared nervous and without a clue on courtroom procedure, but Mr Justice Jones Dotse, a panel member, helped him to relax by directing him on how to proceed with the tendering of the report.

Mr Justice Atuguba then moved in and led Mr Dodoo to tender the report, which had been expected by the public for days.

Mr Dodoo, who testified as a court witness, informed the court that the report comprised a main body, with accompanying appendices, and five volumes which had been prepared into 15 copies.

Each of the nine Supreme Court justices, as well the parties in the petition, the registrar and the Judicial Secretary, has a copy.

Snippets of the Final Audit Report

At a press briefing, a former Deputy Attorney-General and Minister of Justice, Ms Gloria Akufo, disclosed extracts of the final report and stated that the quantity of pink sheets with the Supreme Court Registrar was 13,926.

She said duplicates of 3,593 pink sheets were recorded, with unique 10,333 pink sheets (there were no duplications in this category).

“This clearly shows there is a mix up,” she said, adding that her team had also observed that the 1,097 pink sheets the respondents used in cross-examining Dr Bawumia were not part of the registrar’s set.

She further pointed out that there were cartons of pink sheets at the registry that had not been counted, adding, “So the count is not complete.”

Asked if she had checked why the said cartons of pink sheets had not been counted, she said the petitioners would find out from KPMG in due course whether or not the pink sheets they audited were all that they found at the registry.

Reaction by counsel for the President and the NDC

Reacting to Ms Akufo’s assertions that some cartons of pink sheets were not counted, a member of the legal and communications team of the NDC, Mr Victor K. Adawudu, said the court made a specific order which was complied with.

He declined to delve into details of the final report and Ms Akufo’s statement, adding, “We will leave that to the court to seek the necessary answers from the registrar.”

Mr Addison, after informing the court that his clients needed two days to study the audit report to be sure the responses of the petitioners had been adequately captured, prayed the court to allow his clients get soft copies of the report.

“We need soft copies of the report. We will pay for them,” he prayed the court.

But his request was vehemently opposed by Mr Lithur, who said the audit firm had made it clear before the commencement of the audit that it would not make  soft copies of the report available.

“KPMG said they will keep it under lock and key,” Mr Lithur pointed out in reference to soft copies of the final audit report.

But Ms Justice Rose Owusu opined, “It can always be under lock and key” and urged Mr Lithur to leave the issue on the provision of soft copies or otherwise to KPMG to handle.

“The court took a position not to get into this exercise. It was by consent,” Mr Lithur pointed out.

But Ms Justice Owusu answered, “Let the referee say that.”

Not swayed by Ms Justice Owusu’s intervention, Mr Lithur continued that the parties agreed to KPMG’s terms before the exercise began and indicated that there was the risk of soft copies which were not part of the original report being flown about.

Mr Dodoo said it was a company policy not to give out soft copies of final report to clients from a “risk management perspective” and further conceded that the company had not made it clear to the parties at what stage the soft copy would not be made available.

Dissatisfied with the response from KPMG’s representative, Mr Addison then enquired if the document was not a public document now and also if KPMG was not “imposing its rules on us”, but Mr Dodoo stood his ground and expressed the company’s readiness to take the parties through the process the company used in preparing the report.

In a 7-2 majority ruling, the court refused the petitioners’ request for soft copies of the final audit report.

Mr Addison prayed the court to adjourn the hearing of the petition to Thursday, June 27, 2013 to enable his team to study the final report.

He explained that the draft report was in four volumes, but the final report was currently in five volumes, for which reason the petitioners needed ample time to study it to be sure that the substantial responses in the draft had been captured.

“We need time to go through and satisfy ourselves that our response was inculcated in the final report,” he said, adding, “We will be the last persons to delay the case,” in apparent reply to Mr Lithur’s opposition to the two-day adjournment.

Mr Lithur had indicated that two days were too many and suggested that the petitioners should, in the meantime, be made to move their motion praying the EC to make available the collation forms for 13 constituencies for the petitioners to make photocopies.

Adding his voice to Mr Lithur’s, Mr Tsikata said nothing much had changed in the final report, for which reason there was no justification for the proposed two-day adjournment.

Mr Addison stood his ground and insisted for the two-day adjournment and further indicated that there was no need for the court to resume sitting today because the petitioners would move the motion for the collation forms on the proposed adjourned date.

Mr Justice Paul Baffoe-Bonnie moved in and stated that from his understanding, the petitioners would have problems with the report if their comments were not inculcated into the final report but stated that the two days being requested by Mr Addison were too many.

Mr Tsikata said the essence of the cross-examination of the Chairman of the EC, Dr Kwadwo Afari-Gyan, would be lost if it did not continue in that format, but Ms Justice Owusu intervened and explained to counsel that the procedure was that if there was cross-examination of a witness, it usually followed.

She also stated that the procedure was that documents were usually tendered in evidence to enable parties to cross-examine witnesses on them if the need arose.

For his part, Mr Justice Dotse stated that the case was adjourned to enable Mr Addison to complete his cross-examination of Dr Afari-Gyan, especially on allegations by the respondents that some pink sheets had not been supplied, adding that with the completion of the audit report, Mr Addison could now conclude his cross-examination provided those pink sheets had been identified in the report.

KPMG was commended by Mr Justice Atuguba, while parties in the case also congratulated the firm on its work which it performed for free.

Mr Justice Atuguba described the commendation as “temporary” and indicated the court’s readiness to inculcate its full congratulatory message to KPMG in its final judgement.