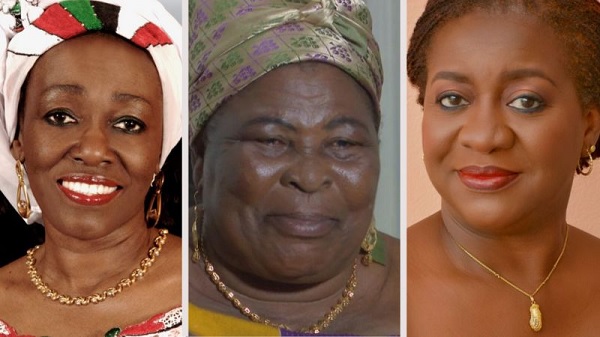 The three women are on the ballot papers as presidential candidates for their parties
30.5k Shares

Three very capable, enterprising, hardworking and dedicated women are part of the 12 who are contesting in the Monday, December 7, 2020 presidential election in Ghana.

All three women have experience in politics and believe in the growth and development of the country, though their approach may be different.

One of them is married; another is single, while the other is a widow whose husband is yet to be buried.

The Electoral Commission (EC) has come out with the various dos and don’ts during the election period, while civil society organisations (CSOs), religious leaders and bodies, as well as other opinion leaders and related public institutions have been educating the public on what to do to ensure peaceful elections.

They have advised the people to learn to be tolerant and see one another as family, but perhaps with different views only, and not as an enemy.

People have been seen in various groups discussing the upcoming elections, which most Ghanaians are certain will be peaceful.

If the electorate vote for any of the female candidates, we will have a first female Ghanaian President who will steer affairs of the country.

People have divergent views and believe that Ghanaian women are not ready to take up such a position.

Whatever the situation is, or the decision the general public takes, come the close of Monday, we will know whether our next President and Chairman of the Ghana Armed Forces will be a woman.

Mrs Donkor told The Mirror in an exclusive interview that once she is elected as President of the country, she will change the maternity leave for women from its original three months to one year to provide enough time for the nursing mother to take proper care of herself.

She said women gave birth through different means and the one year would be adequate for a woman who had just delivered to get properly healed, depending on her circumstances.

The one-year period, she noted, would also be enough for the baby to start eating solid food and the mother could conveniently leave the child in someone else’s care and go to work, without worrying about whether the child would eat or not.

They would be able to send their children to day care centres or schools and pick them up conveniently after work.

Mrs Donkor said she was concerned about the difficulty women faced in accessing funding for businesses or entrepreneurial jobs so her party would provide women with loans under very soft conditions.

She expressed regret that often women went in for loans but “when they don’t make good sales and don’t earn enough they are unable to repay the loans. These women end up in prisons, leaving behind their husbands and children.

In view of this, she said she would make sure that women who had been jailed under those circumstances would be released from jail to come home to their families.

“I will then give them loans and give them three years before they settle their loans. This way, they will be able to use the money efficiently and earn enough to be able to repay the loans,” she stated.

She said women had been marginalised, but nothing could be done without the involvement of women.

The GFP flag bearer also said she was worried about the chemicals farmers used on their farms to control pests, saying those chemicals were often sprayed onto the crops which later “have diverse effects on our health because it gets into the produce.”

She told The Mirror she was worried about unemployment and said she would provide the youth with capital to start their businesses so that they would also earn some income to take care of themselves and live decent lives.

She also plans to provide the youth with farmlands.

Mrs Donkor expressed concern about the fact that media men who went round to gather information for the general public did not have adequate transportation and said she would provide each media house with a vehicle.

On the issue of journalists who have been molested in recent times while undertaking their regular jobs, she said it would be a thing of the past.

The GFP flag bearer said she would deal seriously with those who engaged in same sex marriages.

Mrs Donkor, who hails from Afigya Kwabre in the Ashanti Region and has been an assemblywoman before, has six children.
She is number five on the ballot paper.

“We have a voice, a thought and a dream, and we can work towards achieving them so its important that we do that to make a difference in our lives.

She encouraged women to come out and endeavour to take up positions at higher levels because women were the ones who practically took care of the family, children and the home in general.

“I believe that we’re not developing as fast as we should and that is why I have stepped in to bring my ideas and expertise on board so that the PPP will work to move the country forward.

“I bring on board the strength of a woman, which lies in her compassion for and nurturing of others, to see them grow and prosper; and her enterprising spirit to provide for all which has contributed immensely to the development of our country thus far,” she reiterated. 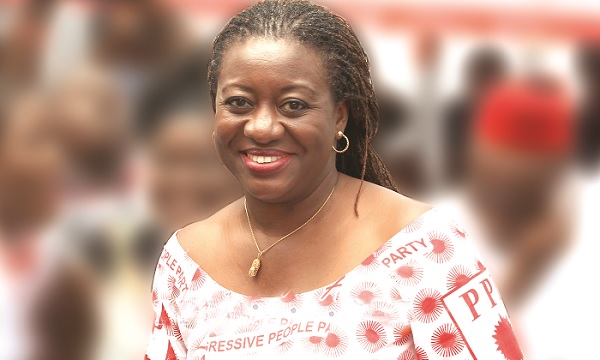 She urged women and all to vote her and her party into power, come December 7, saying that she was driven by the strong will of the Ghanaian woman to succeed no matter the odds, and had a dream of seeing women in key leadership roles in organisations in Ghana.

Ms Dzogbenuku is the Founder/Executive Director of Mentoring Women Ghana (MWG), an organisation borne out of her belief that women in leadership made economic and developmental sense.

Her organisation runs programmes that inspire and empower young women and girls into leadership and making a difference in their communities.

For 12 years, she was the first General Manager of Aviation Social Centre, a fitness and recreational centre in Accra where she introduced various innovative fitness programmes and events into this niche industry in Ghana.

She had previously worked with Ashanti Goldfields as a Liaison Officer in Dar-es-Salaam, Tanzania and prior to that, a Brands Manager with SC Johnson (Johnson Wax).

The PPP flag bearer is a certified Empowerment Trainer who runs personal growth and development workshops particularly for women groups, and gives presentations on etiquette and manners, and also on exercise and wellness to various groups and organisations with emphasis on the youth.

The flag bearer, who has a growing son, young nieces and nephews, wants the best for them and their peers, just like their parents.

Her belief in the positive impact of local women’s enterprise on the development of communities led her to establish the- Ve Flavour Industries, an edible palm-oil production and packaging social enterprise that works with women in the Afadjato South district in Ghana, contributing to their socio-economic empowerment.

She served on the University of Ghana’s School of Languages Management Committee for two years and was also a Coach for the Ghanaian Women’s Social Leadership Programme, a Muheres Por Africa (Women for Africa) a programme run through the New York University’s Wagner Institute.

The PPP’s flag bearer is an old student of the Wesley Girls High School, having had her secondary education there from 1981 to 1988 where she was taught to live pure, speak the truth and right the wrongs.

She is number 10 on the ballot paper.

The National Democratic Party (NDP), is being led by Nana Konadu Agyeman-Rawlings, who believes in the real Ghanaian and African identity and always seen in local prints and promotes local textile production.

Nana Agyeman-Rawlings changed the way most women dressed in the country and on the continent, including her colleague First Ladies from foreign designer clothing to local or African prints.

Mrs Agyeman-Rawlings observed that while she was a First Lady, one very large-scale textile printing firm in Ghana was collapsing, and she thought there was the need to do something about it.

The NDP flag bearer created her own style and identity and decided to wear our local ‘ntama’ with a head gear or ‘duku’. 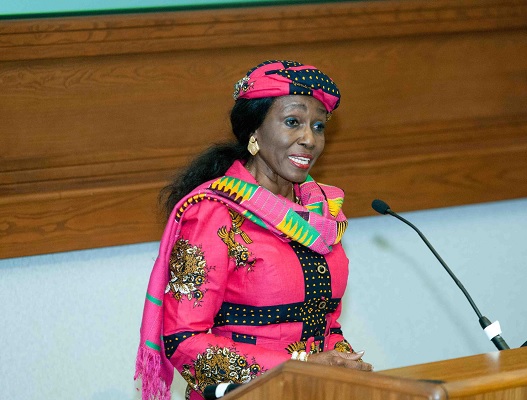 She told The Mirror in an exclusive interview that when she initially started wearing the local attire, there were some who did not agree with her.

While some thought it made her appear like an ‘illiterate’ or as said in our local parlance ‘mama bulor or fira ntama ni’, others preferred to see her in designer skirt suits or dresses and thought she would stop it, but she continued.

Some wondered how she went to Achimota School and the Kwame Nkrumah University of Science and Technology and wore cloth instead of dresses.

She was happy she did because it made women in every corner identify with her and feel confident.

More so, it was better for people to be in their local prints than in second-hand or used clothing.

Most of the women and even young ladies wanted to dress like or look like the First Lady and it helped improve their dressing and made them look very gorgeous as well.

Mrs Agyeman-Rawlings’s role as First Lady took her abroad on various assignments, programmes or projects, particularly regarding the African continent and also beyond and she made an impact on her fellow First Ladies.

She encouraged the First Ladies to take up projects they were very passionate about, which they did and later held meetings where they came out with their projects and pushed their agenda.

She said those projects covered areas such as women empowerment, the girl-child, agriculture and many others.

She shares the view that polytechnics, play an important role in skills, technical and vocational training, which are necessary in nation building.

Mrs Agyeman-Rawlings noted that “This will have to start from the grass roots to equip the people who will then be trained to become the chunk of skilled people who will be hands-on, and who in other places are usually paid even better than those who get educated in other fields or areas”.

She strongly believes that with skills training, people will be trained in various areas so that they can gain the expertise, and with the making of cars, for instance, they will be trained for specific parts, and that is the way forward.

The flag bearer expressed concern that Ghana used to have a lot of skilled carpenters, painters and masons, currently, if one was looking for a carpenter or any other artisan, one was most likely to get one from our neighbouring countries.

Her ideology, starts with power to the people.

The people have got to have power, and not just power for the sake of power, but responsible power.

She is of the opinion that when the people’s power is being used to govern a country, leaders are more careful and honest because they don’t know when the people will rise up and demand accountability and say ‘you’re taking our money when we need it for hospitals or to build schools or roads’.

Nana Agyeman-Rawlings, who played a major role in getting some laws to be enacted in favour of women in the country, was born in Cape Coast.

She said she loved to dance, loved music and enjoyed songs by local artistes.

The NDP flag bearer is the wife of former President, Flt. Lt. Jerry John Rawlings, who died recently after a short illness.

Together they have four children.

Nana Konadu is Number 11 on the ballot paper.