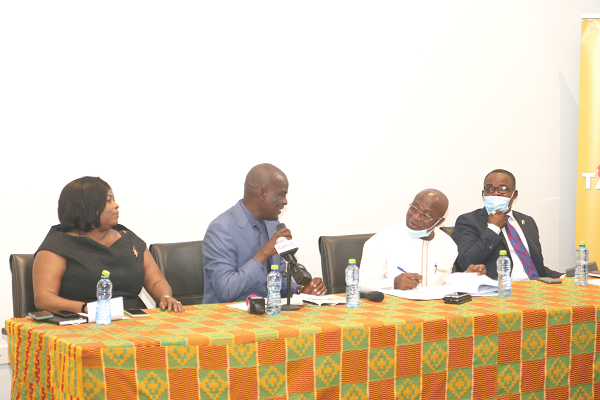 The Majority and the Minority in Parliament have unanimously agreed on the need for the Executive to back its call for consensus building with action to allow Parliament to have a collaborative posture to support government business in the eighth Parliament.

They said the readiness of the Executive to reach out to build consensus and compromises would help secure the peace, unity and stability of the country.

They, however, expressed regret and concern about the polarisation of politics in the country, which was also the cry of the populace, and said the time was now to let consensus-building and collaboration, not partisan interests, prevail for the good of the nation.

The Majority Leader, Mr Osei Kyei-Mensah-Bonsu, and the Minority Leader, Mr Haruna Iddrisu, made the call when they addressed the press on the precincts of Parliament House yesterday.

The event enabled the leaders to highlight the achievements and challenges of the erstwhile seventh Parliament from 2016 to 2020, which dissolved at midnight and expectations for the eighth Parliament.

Mr Kyei-Mensah-Bonsu gave an assurance that in the next Parliament, the Majority would endeavour to be very consultative, as there was ample room for improvement, especially given the fact that the number of MPs on either side of the House was almost at parity.

He recalled that when the NPP went to the Supreme Court in 2013, it had a smaller number of 122 MPs, as against 149 for the NDC, and yet the NPP thought it could govern the country.

“If we had won, the Minority Leader was going to be the leader of government business and we thought we could still have governed this country. What it meant was that if we had won the court case and Nana Akufo-Addo had been sworn-in as the President, it would have been more than necessary to reach out and be very consultative in every step that he took. That is deepening our democratic governance,” he said.

The Majority Leader said the situation where a ruling party had a very sizeable majority and took for granted the other side of the House did not augur well for the country’s democracy.

“And I think that where we are now, we have to be reaching out to each other. I can tell you, between me and my God, that maybe over one year you will not have the Minority Leader even call me to discuss anything. We will both meet at the Speaker’s Conference Room in the lead up to the sitting. I am distressed, but we are making progress,” he said.

He said given the current nature of Parliament, both the Majority and the Minority must set a new standard for improving Ghana’s democratic governance and the operations of Parliament.

“Let us live together with the intention and, indeed, the credo that we are one people in one country with one destiny, and that in everything that we do, we should be informed about the unity and stability of this country,” he said.

President must back action with words

Mr Haruna urged the President-elect to go beyond the rhetoric of wanting to reach out and looking for consensus and compromises by taking concrete steps to reach out to former President John Mahama and other leaders of the National Democratic Congress (NDC).

To him, Ghanaians were not happy with the polarisation, divisiveness and excessive partisanship in the country.

With each side of the House having 137 MPs, he said, there was strong reason for compromises and consensus-building in the next Parliament.

“I have not seen any concrete steps being taken by the President, but it is important that he does that because when he even takes 40 per cent of ministers, Mr Kyei-Mensah-Bonsu will be lacking numbers on the floor and in the Chamber and I will now let him appreciate what it means when you do not have the numbers in the Chambers,” he said.

On the question of whether the Minority recognised the President-elect and would support the government in the eighth Parliament, Mr Iddrisu said every elected MP swore an oath of commitment to serve the people.

He pointed out that the NDC resorted to the Supreme Court to seek redress for the illegitimacy of the outcome of the 2020 elections and “we are calling for decisions on what we describe as ‘travesty of electoral injustice’”.