BY: A. Kofoya-Tetteh
Category: Politics 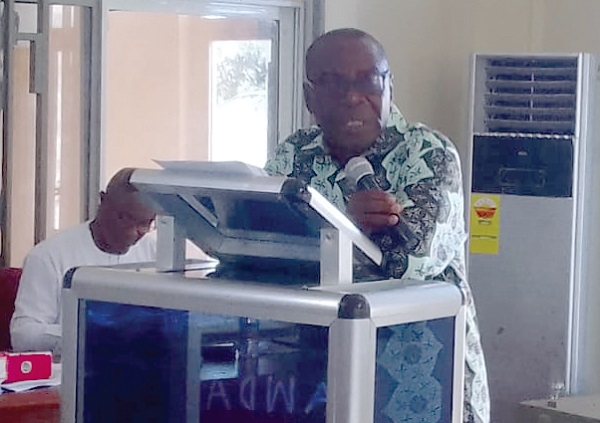 An initiative to transform the Atiwa West District to be one of the best in the Eastern Region is progressing as planned.

Under the initiative, which commenced in 2017, the big towns such as Kwabeng, the capital, and Abomosu, and all the small towns and communities are to benefit from social amenities such as good classroom blocks, clinics, modern markets and potable water.

Such communities, which until 2017, had few social amenities and bad roads linking them now have many such facilities.

The roads in the area, most of which had been tarred, can also be described as the best in the region.

The District Chief Executive (DCE), Seth Asante, who expressed appreciation about the rapid transformation of the area, told the assembly’s meeting at Kwabeng last Friday that a lot more remained to be done to further improve the lives of the inhabitants, mostly farmers cultivating cash crops such as cocoa and foodstuffs such as maize, cassava and yam, as well as others who had gone into trading.


Mr Asante told the assembly members that most of the projects initiated since 2017 had been completed while the rest were at various stages of completion and was hopeful that all would be completed and handed over to the communities by the end of 2024.

He listed some of the social amenities as the Abomosu Science, Technology, and Mathematics (STEM) Senior High School and numerous modern classroom blocks in communities such as Awenare, Kwabeng and Akrofufu.

On health and sanitation, Mr Asante told the House that mechanised boreholes and places of convenience were being provided for residents of Akropong, Kwabeng and Akrofufu while communities such as Bomaa and some small towns were getting health centres to cater for the health needs of the people who had to travel long distances for medical services.

Agriculture
Agriculture, the DCE said, was being boosted with so many interventions for the farmers. Some of the interventions included a free supply of 13,700 oil palm seedlings and 4,500 coconut seedlings while a team of agricultural experts had been monitoring some farms in many of the communities, especially maize farms infected with Fall Army Worms, where insecticides had been made available.

Persons with disability, Mr Asante said, had not been left out and said 88,796 had been given various free items such as sewing machines and refrigerators to earn their livelihood.

Three hundred and sixty-one very poor households from 18 communities had also been provided GH¢60,072 to make a living.

The assembly, Mr Asante said, was able to reach that far with the utilisation of its internally generated funds (IGF) of which GH¢790,870 had been realised out of GH¢710,625 as at the end of September, this year, together with its share of the Common Fund and support from development partners.

Despite such successes, the DCE said there were a few chieftaincy disputes and illegal mining (galamsey), which the assembly was tackling and called for support from the assembly members.

One of the Assembly members, George Kwame Obeng, who had been representing the Asunafo community for the past seven years, was happy that a clinic had been built for the town, as well as the construction work on a classroom block for the local Roman Catholic Primary School was ongoing.

Earlier, the Presiding Member of the Assembly, Douglas Amponsah Paddy, said inhabitants of the communities could only be well catered for if the assembly members identified the real problems in their areas and cooperated with the DCE for their solutions.