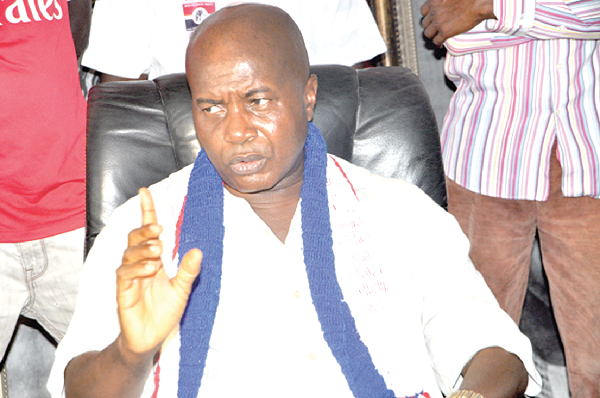 An aspirant for the position of National Chairman of the ruling New Patriotic Party (NPP), Mr Stephen Ntim, has expressed gratitude to the grassroots of the party for their support in his bid to become the national chairman.

Mr Ntim said he was overwhelmed by the show of support by the rank and file of the party during his tour of the 16 regions to participate in the party's regional delegate's conferences.

He said his desire to touch base with the party members across the country demonstrated his readiness to galvanise the support base of the party towards a resounding victory for the party in the 2024 general election.

Mr Ntim who is making a fifth attempt for the national chairman position was warmly welcomed at all the 16 regional delegates conferences with the slogan " Time Aso" "Time Aso", to wit " This is your time".

The tour started on October 1 in the Savannah region and ended on October 27,2021 at Ejisu in the Ashanti region .

It afforded him the opportunity to interact with the delegates who expressed the conviction and belief that it was his time to become the national chairman of the party.

" I am totally overwhelmed by the support and love the delegate's showed me in each of the 16 regions where I was present for the delegates conferences and I want to use this opportunity to thank them for their support", he stated.

Mr Ntim contested for the national first vice chairman in 2001 which he won and worked with some stalwarts of the party during that period that ensured the victory of the party in 2000 and 2004.

The NPP national chairman aspirant has also served the party over the years in different capacities including Coordinator in charge of the Middlebelt Sector for the then presidential aspirant, Nana Akufo-Addo, in the 2014 flagbearership race.

He was consequently appointed by Nana Addo as the National Cordinator for the Settler Communities Project during the 2016 national campaign which contributed to the massive increase in Parliamentary seats from the affected communities.

He also served on the National Council of the party from 2014 to 2018 as a representative of the then Brong Ahafo Region.

Mr Ntim is coming into the race for the National Chairmanship position with immense experience and support base which he has accumulated over the years.