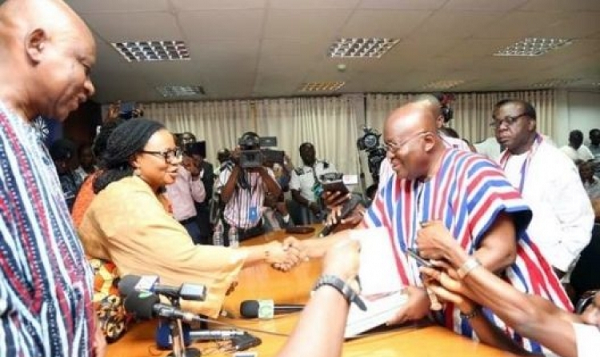 President Nana Addo Dankwa has stated that he had no choice but to act on the recommendations of the Committee set up by the Chief Justice to investigate complaints against the former Chairperson of the Electoral Commission, Charlotte Osei, and her two deputies, Amadu Sulley and Georgina Opoku Amankwaa

publicly on the matter for the first time on Saturday, June 30, 2018, at a townhall meeting with Ghanaians resident in Nouakchott, Mauritania, ahead of the conduct of the 31st AU Summit, President Akufo-Addo explained that he is duty bound to uphold the teachings of the Constitution.

According to the President, whenever a petition for the removal of a high-ranking public official, like the Electoral Commissioner, is forwarded to the President, all the President has to do, as is stipulated in the Constitution, is to refer the petition to Chief Justice, for her to decide if there is a prima facie case or not.

Once a prima facie case is established, the Chief Justice, in accordance with Article 146(4) of the Constitution, must establish a Committee to investigate the complaints. The Committee, in will make its recommendations to the Chief Justice, who shall, then, forward it to the President.

The Committee, the President noted, was composed of a Supreme Court Judge, two High Court judges, and two persons, who are neither lawyers nor Members of Parliament, and who were appointed by the Chief Justice on the advice of the Council of State.

“They (Committee) have been working over the last 6 months, and recommended that the Chairperson of the EC, Charlotte Osei, and her two deputies, Amadu Sulley and Georgina Opoku Amankwah, be removed from office on the grounds of stated and incompetence,” the President said.

Reiterating his commitment to a country governed by the rule of law, the President indicated that the laws governing our country must not be a respecter of persons.

President Akufo-Addo stressed that the process that led to the removal of Charlotte Osei and her two deputies “was not borne out of hate, or a deliberate orchestration to remove some persons from their jobs.”

The petitioners, he added, are workers of the Electoral Commission and not faceless persons, as some would want Ghanaians to believe. The President also recounted the publicly documented spat between the 3 former EC chairpersons.

Mrs. Osei and her two Deputies, Mr. Amadu Sulley and Mrs. Georgina Opoku Amankwaa were fired over incompetence and misbehavior after a committee constituted by the Chief Justice found them culpable of allegations of procurement breaches among others.

The opposition National Democratic Congress (NDC) has served notice that it would embark on a nationwide demonstration against the decision arguing that it was “politically orchestrated.”

The government, however, decried attempts to politicise the decision to dismiss Osei and her deputies, explaining that it was “purely an internally generated matter.”

Meanwhile, Mrs. Osei in a statement said posterity will judge her.

“I prefer to leave the standard and quality of those elections for Ghanaians, history posterity to judge. I still consider it a great and privilege to have been given the opportunity to serve my nation at very high levels during my period in public service.

“I still hold the view and belief that our country deserves an Electoral Commission that is truly independent, unbiased, free, fair and firm, and can fight-off all attempts to politically capture, manipulate, influence and control it. This was always my cardinal objective and my approach to my work.  In due time there will be ample opportunity to fully address these matters once and for all,” she said in a statement Friday.