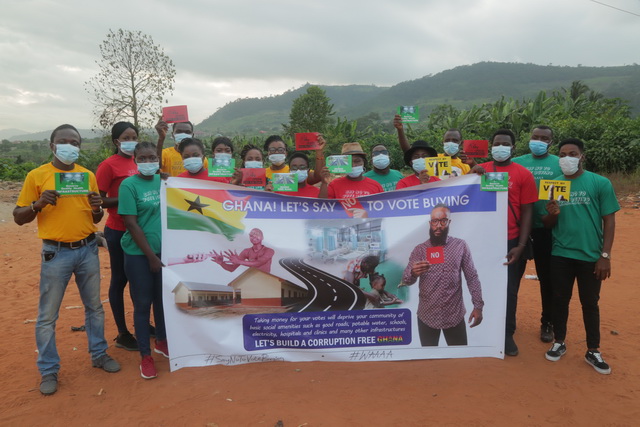 A group of concerned Ghanaians have initiated an advocacy project aimed at getting Ghanaians to shun politicians who attempt to buy their votes ahead of the December 7th, 2020 Presidential and Parliamentary elections.

The campaign dubbed “SAY NO TO VOTE BUYING”, is the group’s contribution towards fighting corruption in the society.

As part of the advocacy tool, the group has produced a 4-minute video that it expects to go viral to educate the public about the negative impact of vote selling.

Ghanaians will on December 7th, 2020, go to the polls to elect members of parliament and a president to steer the affairs of the country for the next four years. Ahead of that exercise, concerns have been raised about the phenomenon of vote-buying in political contests.

Recently, Corruption Watch, an initiative of the Ghana Centre for Democratic Development (CDD-Ghana), sounded the alarm about how pervasive the phenomenon of vote-buying has become in Ghana.

CDD Ghana’s latest report called out a number of members of the New Patriotic Party who attempted to buy their way to victory by enticing delegates with cash and other goodies during the party’s parliamentary primaries.

In a statement, the leader of the Group, Magdalene Eyram Kwashie noted that “Ghana has over the years been deprived of quality leaders because our politics has been mortgaged to persons with deep pockets”.

She noted that the practice has gradually become a phenomenon with its attendant negative impact of depriving the country of accelerated development.

According to her, vote-buying is promoting corruption in the country especially in the political space.

“A number of political actors seeking political office, buy their way through to office, and then tend to recoup their investments through corrupt deals that deprive the nation of the necessary infrastructure investments especially those living in rural communities” she said.

She noted that the poverty levels in the rural areas has made inhabitants susceptible to accepting cash and other items to vote for politicians adding that “these corrupt practices tend to worsen the poverty levels of the voters especially those in rural communities. Therefore, there is the need to stop the phenomenon before it gets out of hand”.

Ms. Kwashie explained that “over the years, we have only confined the subject of vote buying to lip service and this is gradually eating away our society’s moral principles. Now is the time to move the talk to another level with such an advocacy video that brings home the real situation confronting the country”.

A social media hashtag #SayNoToVoteBuying has been created to raise awareness among the Ghanaian populace.

The group says it was seeking financial support to be able to send its message to rural areas and others not on social media, through dance drama sessions.