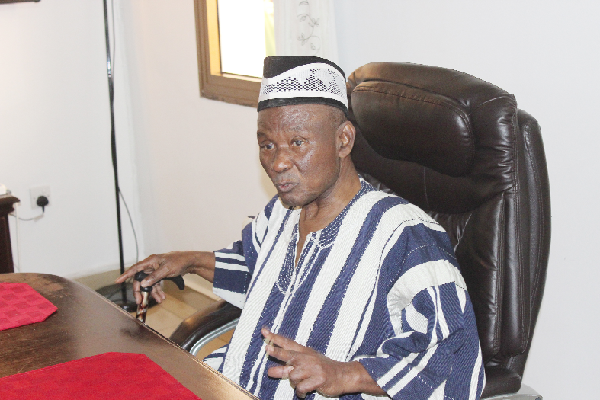 The Paramount Chief of the Nandom Traditional Area, Naa Professor Edmund Mwinyem Delle Chiir VIII, has said the government alone cannot resolve the economic challenges the country is facing and called for a nationalistic approach involving all Ghanaians to help turn things around.

He said in a crisis situation, the government alone could not address the challenges and rather called for the collective effort of the people.

“As leaders, whatever intervention we initiate is not for the NPP or the NDC but for this country. That way, we learn from economists from both parties. It may be a necessary evil to move this country forward,” he stressed.

Sharing his perspective on the economic challenges confronting the country in an interview with the Daily Graphic, Naa Prof. Chiir emphasised the need for a non-partisan conversation to find a workable solution, instead of the approach that had been witnessed.

“Partisan politics can never work in Ghana or anywhere, especially so when you say you have locked the key to inflation and will never go the IMF but end up seeking the intervention of the IMF,” he added.

Naa Prof. Chiir, who is commemorating 50 years as a specialist dermatologist today, was of the view that leaders must appreciate that they were elected to lead the country to better prospects and so they must put themselves up for that service.

The Nandom Naa, who is also the Founder of the Rabito Clinic, a specialist dermatologist facility, said his assertions were influenced by what Dr Kwame Nkrumah taught him: ‘Ghana first before everything’.

He advised leaders to accept criticism in good faith and assess how the criticism could be of help to their positions, either in government or at any institutional level, stressing: “Do not ignore criticism; it will help you perform better.”

“For me, it is Ghana first before your personal interest; Nkrumah taught me that. I think both the opposition and the government must collaborate on these things. They don’t necessarily have to make that public,” he emphasised.

The Nandom Naa emphasised that Ghana had the experts who could be brought together to chart a better course for the country, without even asking to be paid.

He was unhappy that partisanship was affecting almost everything in Ghana, stressing that that was not in the interest of the country.

“The way we do politics here is not good. When you are in opposition, you are always pulling the government’s leg, and I think we should try and change that,” he advised.

He stressed the need for leaders to show humility by admitting it when they got it wrong and be willing to consider suggestions from outside that could help the country.

Naa Prof. Chiir emphasised that there should be no distinction between the opposition and the government when it came to national issues, since knowledge had no colour.

“My appeal to the President is that he should let party lines be thin. He should also look for people who can tell him the truth, and nothing but the truth. The sycophancy should stop,” he added

“In the supreme interest of our people, we must talk to one another. It may not be in public. Criticisms must also be constructive; it is easy when you are not sitting on the chair,” he added.

He explained that forging a united front did not mean every Ghanaian must belong to one political party, but that with unity of purpose, there would be peace, and development would follow.

Naa Prof. Chiir expressed regret that partisanship had gone on to the extent that “what we eat is politics; what we drink is politics”.

“Maybe it was the wish of God that we had this small margin between the NDC and the NPP in Parliament. It is God’s way of telling them that they should speak to each other now. I am, therefore, pleading with Ghanaians, particularly party supporters, to think of the country first,” he added.