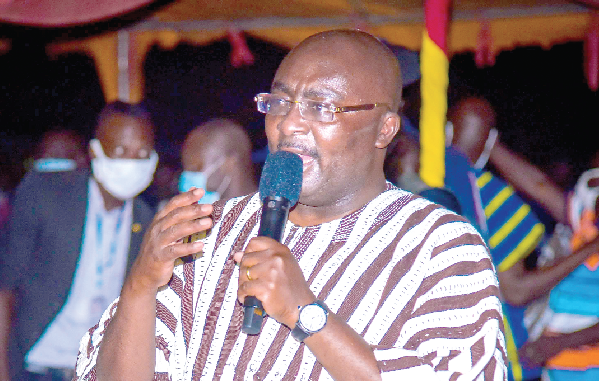 The Vice-President, Dr. Mahamudu Bawumia, has reiterated the importance of the forthcoming December 7, 2020, general election with a call on Ghanaians to vote massively for the New Patriotic Party (NPP).

He said it was either the people voted for the NPP for good governance and progress or the opposition National Democratic Congress (NDC) for “incompetence and mismanagement”.

Dr. Bawumia was speaking in Wa as part of his two-day tour of the Upper West Region.

A rousing crowd, with many on motorbikes, received the Vice-President amid dancing and motorbikes display.

While cheering and applauding the Vice-President, many also made the *4More4Nana* sign, the signature sign of the NPP indicating that President Nana Addo Dankwa Akufo-Addo must be given a second term in office.

Dr. Bawumia said a vote for President Akufo-Addo and the NPP would consolidate the gains made by the government and further create a path to prosperity for the country and also improve the well-being of its citizens.

According to him, the first term of President Akufo-Addo had brought great relief to all parts of the country, including the Upper West, due to the people-centred and impactful policies initiated by the government.

“Free SHS, Planting for Food and Jobs, the restoration of trainee teachers and nurses allowances, fixing ‘dumsor’, NaBCo, improvement in infrastructure and social amenities, among others have brought relief to all of us,” he added.

He said the tremendous achievements by the NPP were an indication that Ghana was poised for more greatness when the mandate of President Akufo-Addo was renewed.

On the other hand, Dr. Bawumia said a vote for the NDC would plunge the country into decay and underdevelopment.

He said for example, the SADA initiative which was touted by the NDC as a policy meant to accelerate development in the northern part of the country rather became an avenue for corruption.

“The NDC said the funds were invested in guinea fowl rearing and tree planting, among other things.

“According to NDC officials, the guinea fowls all flew to Burkina Faso and the trees have also died through drought and bush fires. Is this a proper management of resources?” he quizzed. He told the people to vote wisely because their future depended on the elections.

"The NDC party cannot manage the resources of the State if you give them the opportunity to come back," he said.

Earlier, Dr. Bawumia paid a courtesy call on the Wa Naa, Naa Fuseini Pelpuo IV, and his elders to seek their blessing and guidance.

Naa Fuseini Pelpuo expressed satisfaction that so far, the political campaign was going on peacefully. He prayed that the prevailing peace would be sustained till the end of the elections.

The NPP made massive inroads in the Upper West Region in the 2016 elections by winning five out of the 11 parliamentary seats up for grabs, with the rest going to the NDC.

This was a massive improvement on the party’s electoral fortunes in the region as it did not win a single seat in the 2012 elections.

The Upper West Region is, therefore, a crucial battleground for the NDC and the NPP. The 2020 elections will show whether the NPP will consolidate the gains it made in 2016 or the NDC will bulldoze its way to victory by drastically reducing the gains made by the NPP in 2016.