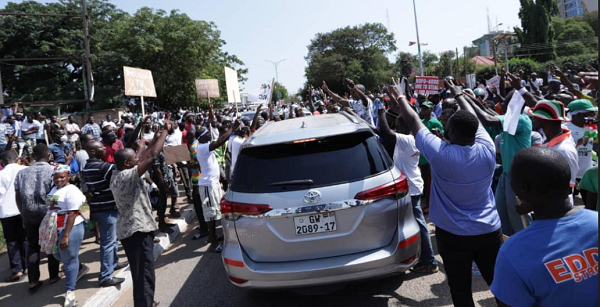 Leaders of the National Democratic Congress (NDC)'s led sit-down demonstration at the Electoral Commission (EC) headquarters has called on their supporters not to fight the security team stationed at the place.

“The police and soldiers are our brothers, they are not here to intimidate us, they are here to protect us,” one of the leaders told the crowd.

As a result of the assurance from their leaders, the NDC supporters have now turned the sit down into a carnival, dancing and singing to Mahama’s campaign songs.

This is a sharp turnaround from what happened when the supporters initially moved to the EC’s headquarters.

They were arguing and pointing fingers at the security team after the police moved the barricade further away from the road in front of the EC headquarters.

The NDC supporters started massing up at the EC’s headquarters to protest what they claim to be the stolen verdict of the people.

They claim the Presidential of the NDC, Former President John Dramani Mahama won the election.

They have vowed not to leave the EC’s headquarters until the EC’s chairperson declares Mahama as the winner of the Presidential polls.