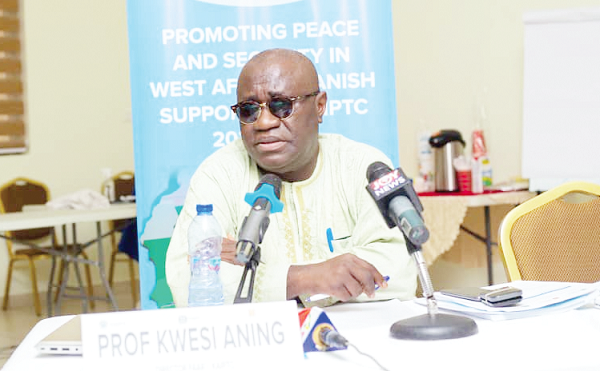 The Director of the Faculty of Academic Affairs and Research of the Kofi Annan International Peacekeeping Training Centre, Prof. Kwesi Aning, has called on security agencies to map out strategies to prevent the spread of extremism which is subtly gaining grounds in the country.

He mentioned that the current focus on counterterrorism was necessary but agencies still needed to develop new approaches to safeguard the country’s internal peace and stability.

Making reference to increasing extremist attacks in neighbouring countries, Professor Aning said Ghana risked falling prey to similar attacks because the extremists preyed on other West African countries because they had the country on their radar.

“Our agencies should come up with a holistic preventive approach that would strengthen our vulnerable communities to enable them to resist any scourge and protect our security gains,” he stressed.

Professor Aning was speaking at a workshop in Cape Coast organised by the Kofi Annan International Peacekeeping Centre (KAIPTC) in partnership with the National Peace Council (NPC) to assess the resilience of existing local and national infrastructure to address and overcome conflict.

He said the country had over the years trivialised extremists and had done very little to address instances that were likely to trigger attacks.

Prof. Aning said stakeholders were still riding on the country’s peaceful nature and looked on unconcerned about minute violent elements that were gaining grounds in some communities.

“We tend to deceive ourselves that the threat is out there, but increasingly, the threat is emanating from within and it is almost impossible to determine their next course,” he said.

He said KAIPTC was working closely with the National peace Council (NPC) to create the necessary national structures to prevent conflict in a timely manner.

He called on the government to empower national institutions with adequate resources and skills to enable them to resolve conflicts and sustain peace in the country.

The Chairman of the Central Regional Peace Council, Mr Matthew Eghan, for his part called for a peaceful coexistence to strengthen the ideals of peace in the country.

He said no one would be immune from persecution in the face of conflict and that was why the public needed to work collectively to ensure that peace prevailed at all times in the country.