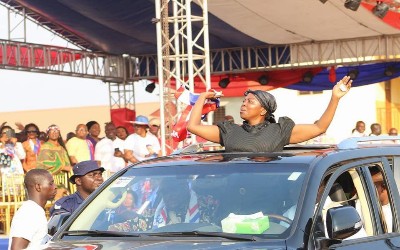 Madam Lydia Seyram Alhassan has replaced her husband as the Member of Parliament for the Ayawaso West Wuogon Constituency after winning the by-election held on Thursday in Accra.

She polled 68.80 per cent of the valid votes cast.

The conduct of the polls was marred by a shooting incident at the residence of one of the aspirants,Mr Brempong; which resulted in injuries to 18 persons and an assault on an observer at one of the polling stations.

The Criminal Investigations Department of the Ghana Police Service have commenced investigations into the shooting incident.

According to some eyewitnesses at the scene, members of vigilante groups affiliated to the NPP shot at NDC members who had gathered at Mr Brempong's to go and cast their votes.

At the La Bawaleshie School Park, the Member of Parliament of Ningo Prampram, Samuel Nartey George who was observing the elections was allegedly assaulted by some unidentified persons.

The incident also resulted in the opposition party directing their agents to withdraw from the various polling stations.

However, the Communications Director of the NPP, Yaw Buabeng Asamoah discounted the allegations that the gunmen were affiliated to his party; insisting that the violence was orchestrated by the opposition NDC to discredit the election.

Addressing the media, Mr Asamoah, said: “this is a hugely orchestrated attempt by the NDC because they knew from the beginning that they were going to lose.”

Mr. Asamoah, who doubles as the MP for Adentan also accused the Member of Parliament for Ningo Prapram, Sam George, of exaggerating the attack on him.

The Constituency has a total number of 88,710 registered voters across 137 polling stations but only 17, 589 of them voted in the poll out of which 88 votes were rejected by the Electoral Commission.

History of the constituency

Madam Alhassan's victory brings to six the number of times the NPP has now won the Ayawaso West Wuogon seat, as against two by the NDC.

The 1992 parliamentary election had the Mr Francis Napoleon K. Kumah of the National Convention Party (NCP), an appendage of the NDC, winning.