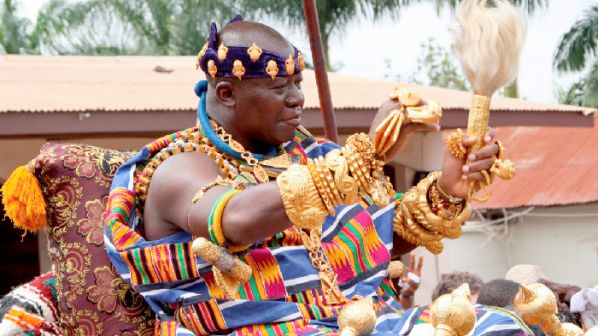 The Asantehene, Otumfuo Osei Tutu II, has asked politicians to look beyond implementing populist projects with the intention of winning elections to investing in long term projects to create jobs and enhance security

said long term investment in agriculture and good roads for instance over the building of overhead bridges were key to a sustained future of the country.

Otumfuo said until we our needs as a people, governments will come and go and the citizens will still not be happy.

"If the reasons why the people voted you (political parties) are not met, your continued stay in power will be irrelevant," Otumfuo said at the Mathias Palace on Saturday when former Asante Kotoko Football Club chairman, Herbert Mensah, and his team of local and international partners and sponsors called on the king to wish him a happy 20th anniversary on his ascension to the throne of the Ashanti Kingdom.

The team was also at Manhyia to brief Otumfuo on the May 9 Charity project which his sponsors have been very supportive of over the last 18 years.

Some 127 football fans were killed in the Ghana Premier League midweek clash at the Accra Sports Stadium following a stampede on May .

Police fired several canisters of tear gas into a rowdy the north wing of the stadium, popularly known as the Ade Coker Stand, who threw all kinds of missiles into the inner perimeter in protest of a winning goal scored by Ishmael Addo of Hearts. Hearts won the match 2-1.

Otumfuo said what the youth needed jobs and security irrespective of which government was in power for it was the only way their support base could be guaranteed.

"For the overpass bridge being constructed in Tamale is not what the people need at this time. What's the use of it when right after the bridge the rest of the roads are in deplorable conditions?” Otumfuo asked.

The king said it was time politicians connected with the grassroots to address their crucial needs rather than pursuing things that could only win them the next election.

Mensah applauded Otumfuo for his wise counsel to successive governments and helping bring investments to Ghana over the years.

He said Otumfuo remained the only leader to have shown concern to the families of the May 9 disaster through direct contacts and show of support.

Mensah, now chairman of the Ghana Rugby Association, and his team presented assorted items to the king to help in the celebration.