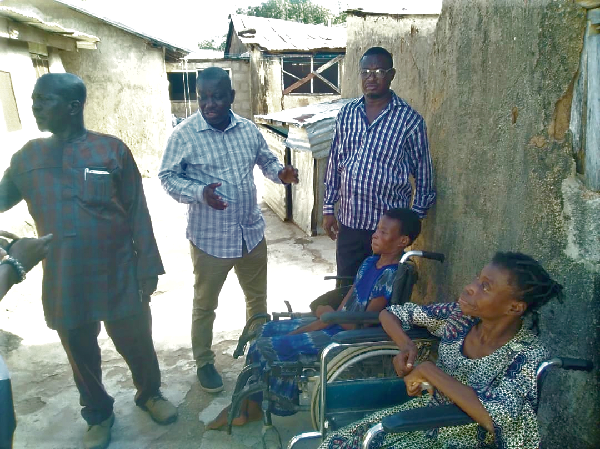 The National Democratic Congress (NDC) Member of Parliament (MP) for Bolgatanga Central in the Upper East Region, Mr Isaac Adongo, has donated assorted items and cash to a widow and her two daughters who are physically challenged and battling with autism.

Mr Adongo handed over the items, which included rice, cooking oil, washing soap, detergent and tin tomatoes to the family.

The cash was to support the petty trading of the widow, Mrs Janet Nsoh, in koose and fried yam to cater for the upkeep of her daughters, Ayine and Paulina Nsoh.

The MP, who is the Deputy Ranking Member of the Finance Committee of Parliament, also pledged to continue supporting the family with stipends and foodstuffs in recognition of their financial difficulty and the health condition of the two daughters.

“We will have to continue to provide the support and this is not going to be the last time. My hope is to be able to continue the stipend and once in a while replenish the food supply for them so that they can also have better lives” he said after the first donation.

Mrs Nsoh lost her only son and bread winner of the family eight months ago and has since shouldered the responsibility of taking care of her two autistic and physically challenged daughters through her petty trading in ‘koose,’ a local delicacy, and fried yam.

She told the MP’s entourage that her daughters were both perfectly well but fell ill and could not walk again.

She said while Ayine suffered her disability about 13 years ago, Paulina, the elder, suffered hers about 20 years ago.

The plight of the family first came to light when an Upper East Region-based journalist, Mr Stephen Chidozie, made a plea to philanthropists to come to the aid of the family.

“It’s not everyone who is fortunate in life but this also tells us how fortunate we are and we must thank God that we are given some attributes that allow us to do the work that we do and to go out and look for shelter, food and everything for ourselves.

“It is not because we are special but it is because God just had mercy on us,” Mr Adongo said.