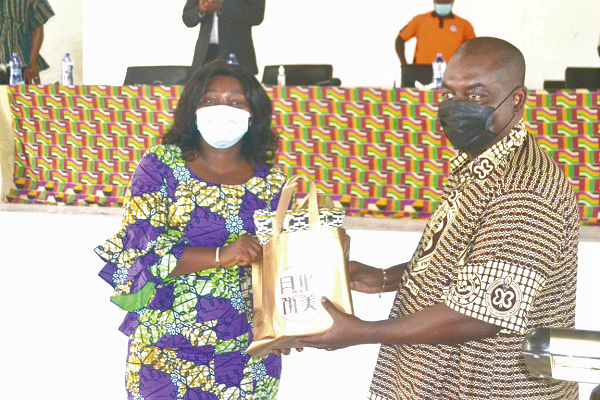 The government’s ability to increase local revenue mobilisation is key towards achieving the Ghana Beyond Aid agenda, the Executive Secretary of the Civil and Local Government Staff Association of Ghana (CLOGSAG), Dr Isaac Bampoe-Addo, has stated.

According to him, so long as the nation was unable to improve its local revenue mobilisation, the Ghana Beyond Aid agenda would be a mirage.

“Before the nation can achieve this bold initiative, there must be an efficient and effective mobilisation of revenue locally to enable the government to fund many projects through local funds,” he stated.

Dr Bampoe-Addo was speaking during a meeting of CLOGSAG members in the Agona West Municipality in Agona Swedru on Wednesday, March 24, 2021.

As part of the meeting, the Central Regional Minister, Mrs Justina Marigold Assan, was honoured for her contributions to the cause of the association, as well as the municipality during her tenure as the Municipal Chief Executive (MCE).

Dr Bampoe-Addo said CLOGSAG believed in the Ghana Beyond Aid agenda and would offer the needed support to the government through the improvement in Internally Generated Funds (IGF) to drive the progress of the country.

He added that the association was not only interested in shouting and stampeding the government for increased wages, salaries and other benefits, but would come up with interventions and measures aimed at improving revenue collection in all Metropolitan, Municipal and District Assemblies (MMDAs).

As part of efforts to shore up revenue collection in all MMDAs, he said CLOGSAG had put together a technical team of consultants to come up with programmes and initiatives tailored towards shoring up the government’s revenue.

“I am happy to announce the programmes and initiatives will first be piloted in Cape Coast before being rolled out in other parts of the country,” he said.

He urged members of the association to be ready for the activities to be rolled out towards achieving its intended objective, saying, “If you are able to assist the government to increase its local revenue, it will obviously place you in a better position to demand better working conditions.”

The Central Regional Minister, Mrs Justina Marigold Assan, expressed gratitude to the association for the recognition and honour.

She commended the association for its continuous support to the government over the years towards improving the living conditions of Ghanaians, stressing that “the government recognises your commitment towards achieving its vision and will continue to roll out interventions to improve your welfare”.

She pledged to offer the needed support to staff of all the MMDAs in the revenue mobilisation drive so as to propel the growth and development of the region for the benefit of the ordinary people.