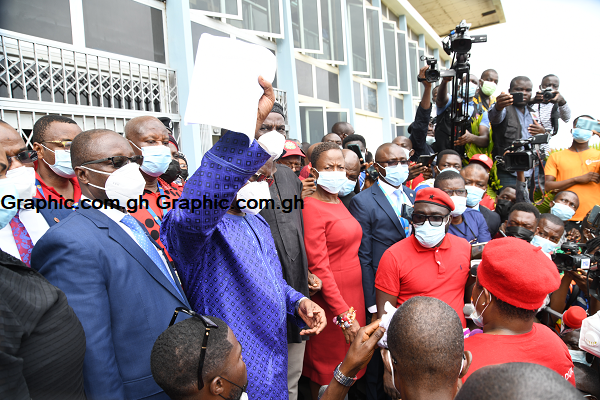 Mr Osei Kyei Mensah-Bonsu (2nd left) Majorty Speaker of Parliament displaying the petition after receiving it from Ms Ruth Seddoh, National Deputy Organizer of the NDC. With him are Mr Haruna Iddrisu (3rd left) and some leadership of Parliament.

The youth wing of the National Democratic Congress (NDC) on Tuesday, July 6, 2021, embarked on its ‘March for Justice’ demonstration to demand justice for the atrocities caused by the security agencies under the current government.

The group had the backing of the Inter-Party Resistance Against the New Voters Register (IPRAN), a group made up of six other political parties who have expressed their support for the cause.

The group submitted a petition to Parliament after the protest.

A Deputy National Youth Organiser of the party, Ruth Dela Seddoh, presented the document to the Minister of Parliamentary Affairs, Osei Kyei-Mensah-Bonsu.

The first petition was presented earlier to President Nana Addo Dankwa Akufo-Addo, on whose behalf a Deputy Chief of Staff, Emmanuel Adumua-Bossman, took it at the Jubilee House.

Read the petition presented to Parliament below:

Police to provide security for NDC demonstrators on July 6