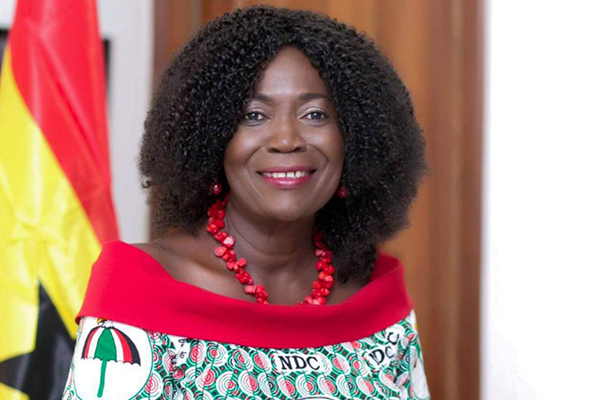 The National Democratic Congress (NDC) Member of Parliament (MP) for Kpando Constituency in the Volta Region, Mrs. Della Adwoa Sowah, has called for a united front to retain Kpando parliamentary seat in the general elections 2024.

She said political character assassination, sabotaging, and backbiting is not in the interest of the party.

She, therefore, urged the few disgruntled members and supporters of the party to bury their differences and join forces with her to work hard to retain the Kpando constituency parliamentary seat for the NDC.

Mrs Sowah made the call in an interview with AKpini Radio at Kpando on Saturday, September 3, 2022, to respond to some false allegations leveled against her by some constituents.

There have been a number of publications on the social and local media platforms alleging that the people of Kpando are unhappy with the performance of their MP of late. This she said was a false fabrication. She said the noise particularly on social media was not the case on the ground.

She stated that the coordinated publication was a scheme by a few discontented individual personalities to tarnish her hard-won reputation.

This, she said is doing more harm to Kpando as a whole rather than her.

She added that the latest development would not help to bring peace and growth to Kpando as well as the nation as a whole.

“Those who are doing these things should know that at the end of the day, they are rather destroying the reputation of Kpando but not me as the MP or political leader," the MP emphasized.

"If those who are currently creating confusion in Kpando constituency thought that they are exhibiting such nefarious acts ostensibly to block me from winning the upcoming NDC parliamentary primaries, then they will surely fail to achieve their intended target," Mrs Sowah fired back.

My God is still alive

The female legislator attributed the success she chalked despite their scheming in the year 2019 parliamentary primaries on the ticket of the NDC to the doing of God.

She added that that same God who was there for me last time, has not died, and “the God is still alive. My God is ever ready to still help me to win the NDC parliamentary primaries in 2023'. She continued, 'He would subsequently protect me to win the Kpando constituency parliamentary seat for the NDC in the 2024 general elections.”

Mrs. Sowah, therefore, cautioned her detractors to stop making what she described as “unnecessary noise in the media using false identities and making false allegations” against her.

“It is important for them to stop the noise in the media and rather come and join hands with me to push the dreams of retaining the seat and develop the Kpando constituency," she stressed.

She also debunked claims that she has hired the services of the police officers to harass or arrest some residents of Kpando constituency.

“Those who are making such statements in the air should desist from peddling these lies because these behaviours are bad and dangerous. If those miscreants are peddling these falsehoods against me because of the NDC's upcoming parliamentary primaries, l am telling them that the date of the election has not yet been decided. So l am cautioning them to stop the sabotage," she further stressed.

Mrs. Sowah stated that as an MP, she operates an open door policy hence "If you have any good knowledge, skill, and idea and you want to do something to help the Kpando constituency then l wish that you should bring them on board for all of us to build Kpando constituency".

Mrs Sowah who described herself as a developmental-oriented female MP said her achievements included paving the entire Kpando Market, providing them with a modern information centre, plastic chairs, electricity, and lighting of sheds for 24-hour operations.

Mrs Sowah said over 2, 315 young people had benefited from her educational support, adding that her track records in terms of provisions of health care, education, water, sanitation, hygiene, security, road networks, drainages, social services, investing in human resources, helping PWDs, fishing, and farming communities are visibly for all and sundry to see in their implemented communities.

She added that through her efforts Kpando has a modern bridge at Dafor, a community in the constituency.

In addition, she said "the Road Minister has approved over 28 kilometers of roads for Kpando".

The MP is also credited with playing a key role in the resolution of an over 40 years of Chietancy dispute in Kpando.

Meanwhile, opinion leaders in Aloyi are threatening a massive demonstration if the noise in the media doesn't stop.